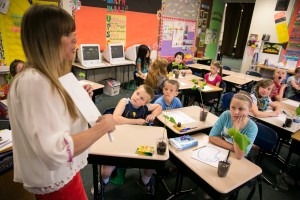 Rep. Chris Reykdal (D-Tumwater), vice chair of the House Education committee, issued the following statement on the compromise deal reached in the U.S. Senate on the No Child Left Behind fix.

“Today is a great day for Washington’s one million school kids. After years of waivers and temporary fixes to the many problems created by No Child Left Behind, Congress appears to be on the right track in adopting commonsense solutions that move our nation, and Washington state, forward on education policy. Many thanks go out to our U.S. Senator Patty Murray for her great work in partnership with Senator Lamar Alexander on this effort.

“Last year, Washington schools were subjected to punitive sanctions by the U.S. Department of Education because they demanded that we rewrite our state laws to meet their narrow definition of accountability. Our refusal to give in to this federal overreach was a courageous stand by lawmakers on both sides of the aisle. If Congress acts on the Murray/Alexander agreement, we can move forward with doing what’s best for students, teachers, and families.

“The new federal legislation will increase focus on requiring more rigorous and challenging standards in reading, math, and science. Fortunately, the current draft makes clear that each of the states, and not the U.S. Department of Education, will determine rigor and the use of assessments. Here in this Washington, our Evergreen State, we’re already moving in that direction.

“A bipartisan group of lawmakers are working on a plan, House Bill 2214, to fix our current student testing system in our high schools. Assessment should be used to help students, to target interventions and content for those who need more, and to push those students ready for higher learning to more rigorous classes. Our state is taking a lead on simplifying our testing and focusing the results on student improvement not student or teacher punishment.

“In Washington state we spend $68 million per year in our two-year college system alone on remedial courses, primarily in mathematics. By emphasizing rigorous senior-year courses instead of more testing, we can begin the process of saving taxpayers and tuition payers tens of millions of dollars as students move directly to college-level coursework.

“The good news from Washington, D.C. needs to end up on the president’s desk soon so that we can finally put an end to unnecessary and punitive sanctions against our schools and instead, focus on adopting state-level policies that better prepare our kids to compete in a 21st Century economy. Washington state is taking a lead and we are ready to move forward.”