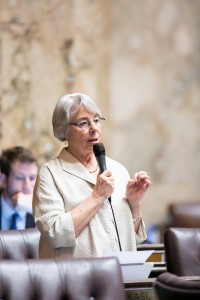 “Being poor isn’t a crime. And it shouldn’t mean a life sentence,” said Kagi on the House Floor. “All children who make mistakes, rich or poor, deserve a second chance. But currently the system is too burdensome, adding thousands of dollars in court fees to a sentence, so only youthful offenders who have the means to pay are able to move on with their lives.”

The YEAR Act will remedy this injustice and give all eligible youth the opportunity to seal their records, not just those from families who can pay. The YEAR Act eliminates most non-restitution Legal Financial Obligations from statute so youths will be charged only what is necessary to make victims whole.

Judges are allowed to exercise discretion in considering the youth’s ability to pay when ordering the amount of restitution and can order community service instead of monetary payment. If the victim chooses he or she may recommend where the offender performs community service.

“Justice is about accountability, compassion and equality,” said Kagi. “The YEAR Act accomplishes all three. Passing this bill is a crucial step toward making sure victims are made whole and juveniles are held accountable but can also move on with their lives – get a job, a better education and escape a lifetime of poverty and crime.”

The YEAR ACT will now head to Governor Inslee’s desk for his signature.