OLYMPIA – Increasing voter registration and participation in elections in Washington is the aim of legislation passed out of the House today.

HB 2682 would automatically register eligible voters who have an enhanced driver’s license, commercial driver’s license, are covered through the state health benefits board or certain programs in the Department of Social and Health Services. The state has already verified the citizenship of these people. “It is the right to vote; voting is a right not a privilege,” said the bill’s prime sponsor, Rep. Sam Hunt (D-Olympia). 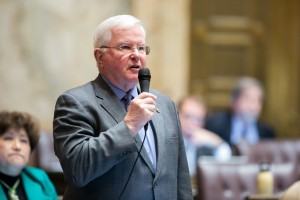 “This bill is about people who have proven their citizenship. In America, the right to vote is a fundamental freedom. We should be doing all we can to maximize the voice of the people by making our elections as accessible to voters as possible. This measure is a substantial step in that direction.”

In 2015, Washington experienced one of the lowest election turnouts in state history, not even breaking 40 percent of eligible voters. Analysis shows that automatic voter registration boosts numbers of registered voters as well as turnout at elections.

Oregon enacted a similar law last year and in the first month 7300 new registrations were received, and 17000 updated voter registrations.

“I believe we should do everything we can to make voting easier, not harder,” Rep. Hunt said.

A full automatic registration of those with regular driver’s license is not possible in our state because the Department of Licensing (DOL) does not request proof of citizenship or legal presence. State and federal law restrict voting to citizens, 18 and older.

In addition to increasing voter rolls, this measure reduces paperwork and streamlines the registration process, allowing agencies to integrate voter registration services into existing forms and online prompts. Addresses of participants are not subject to public disclosure under this bill and in accordance with current law.

The measure now moves to the Senate for further consideration.