The legislature did not come to an agreement on the supplemental operating budget by the end of the 60-day regular session. The Governor has called us back for special session to finish our work on the budget. While I am disappointed Senate Republicans couldn’t come to an agreement with our negotiating team, I am here to stand up for our values.

You sent me here to stand up for the children and grandchildren who are missing opportunities because the state is chronically under-funding schools; the people in need of mental health care that have nowhere to turn; the families that can’t afford a home and are just trying to find a safe place to sleep tonight. These are the emergencies facing our state. We cannot turn our back on those in our communities who are suffering.

A budget is a declaration of our core values and the decisions we make today will shape the future of Washington state. While this work should have been completed during regular session, I believe a few extra days of session are worth it in the long run to make sure the budget we pass invests in education, helps those in need, and rebuilds the middle class. 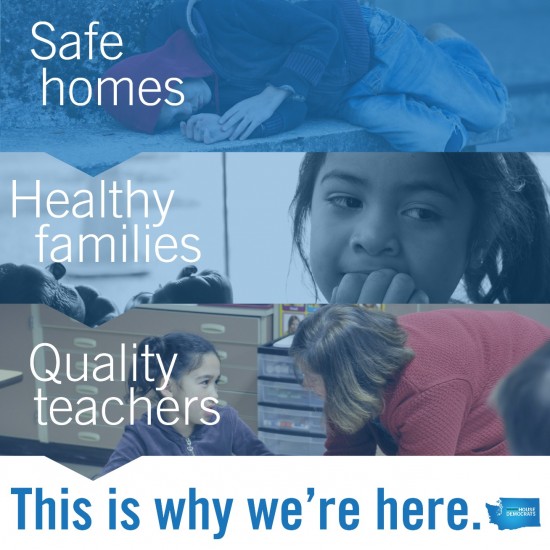 Why I voted no on charter schools

I wanted to share my reasons for voting no on SB 6194, the charter schools bill.

SB 6194 attempts to resolve the funding problem with charter schools, but it doesn’t address several other constitutional issues that will likely throw charter schools into turmoil once again. Under the bill, non-profit corporations that run the schools receive taxpayer dollars and school boards are appointed instead of elected.  The Superintendent of Public Instruction has no authority over the schools and they are largely deregulated since they are exempt from many state laws.  If we had amended the bill to pause the opening of future charter schools, so that we don’t have even more families stuck in the middle of legal cases, one of my concerns would have been addressed.

Many of you remember that when lotteries were approved by the voters in Washington, that money was set aside for education. Now, money from that account will be funding charter schools. That means the lottery money is going to something different than what voters approved.

While I support every family’s desire to get the best education possible for their children, I have a serious problem with fixing charter schools before addressing our obligation to fully fund education.  The Supreme Court declared that the state has failed to meet our paramount duty to fund public schools.  Charter schools serve about 800 students; public schools serve over one million.

We made some progress this year in addressing the needs of our Washington students, but not nearly enough and I’m as frustrated as you are. The legislature needs to be passing laws that are constitutional and addressing the needs of all students–and I’m not going to stop fighting until we meet our obligation to you and your family.