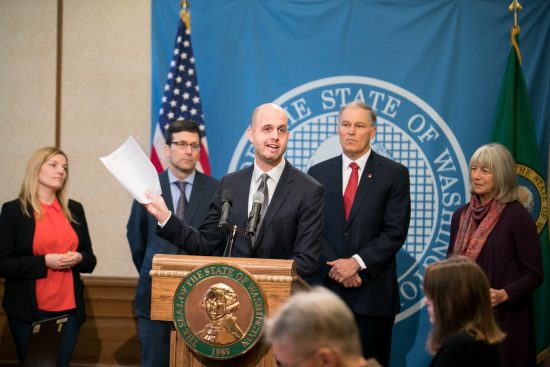 “Literally no one except the giant cable companies thinks it is a great idea to let the giant cable companies decide what content you see on the internet, how fast it is downloaded, and how much you pay for it,” Hansen said during a press conference yesterday with Governor Jay Inslee and Attorney General Bob Ferguson. “That’s why we have these rules in the first place.”

Hansen’s bill, HB 2282, would ensure that under the state’s consumer protection authority, Washington would continue to safeguard net neutrality for consumers despite the FCC’s rollback.  This means Washington consumers would still have protection from:

Maintaining net neutrality is an issue that has broad support. With the federal protections now removed, Hansen looks forward to working with his colleagues across the aisle and in the Senate to get them firmly in place at the state level.

“My bill will protect the free and open internet in Washington state,” Hansen said, “It bans internet service providers from blocking or slowing down lawful content, so our consumers aren’t negatively impacted by the FCC’s terrible decision today.”

Read a summary and full text of the bill here.