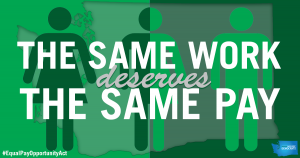 Last week, House Bill 1506 passed the House on a 69-28 vote! This measure will update the Equal Pay Opportunity Act for the first time since 1943. This is the fourth year the House attempted to update Washington’s Equal Pay Act. In previous years the bill died in the Republican majority Senate. This year, Democrats have the majority in the Senate.

There’s no doubt the wage gap is real. In 2018, many women are the primary breadwinners for their families and even more are the sole provider for their children. Existing laws have failed to create gender pay equity and it is hurting our communities.

Women are often unaware employers are discounting their work. By creating negative consequences for employees who discuss their own pay, businesses can pay women less without anyone being the wiser. HB 1506 will ban policies that foster wage secrecy and prohibit retaliation against employees who want to discuss their pay. Employees should never face retribution for asking for equal pay and equal opportunities for advancement.

I was proud to co-sponsor this legislation. I hope to see a future where my own son and daughter have equal pay opportunities. 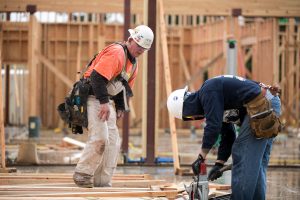 On January 18th, we finally passed the long anticipated capital budget. Together with Sen. Andy Billig and Rep. Timm Ormsby, I was proud to help make the $4.3 billion budget a reality for Washingtonians.

Read more about what the new capital budget means for us in Spokane here: https://housedemocrats.wa.gov/marcus-riccelli/billig-ormsby-and-riccelli-help-pass-the-capital-budget-investing-in-local-jobs-and-infrastructure/.

In remembrance of former Speaker of the House Tom Foley, the House passed a joint memorial requesting to name State Route 395 the “Thomas S. ‘Tom’ Foley Memorial Highway.” I am pleased to honor his legacy of committed public service by sponsoring this proposal. Read more about that process here:

As always, your engagement is critical. Please keep in touch!