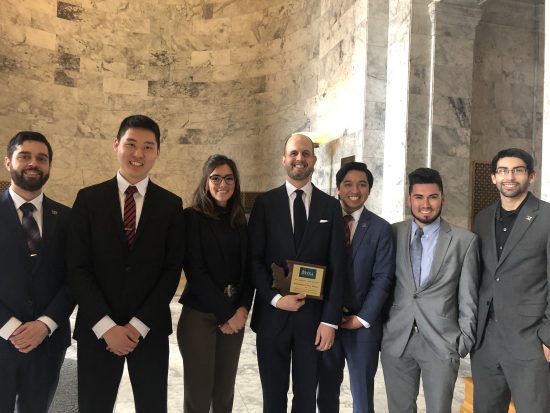 “It took a huge team effort to make college more affordable this year, and I’m really grateful for this award recognizing the part I played on the team,” Hansen said.

Rep. Hansen’s selection comes at the conclusion of a supplemental budget year that saw big wins for higher education, including elimination of the funding backlog in the state’s principal financial aid program, the State Need Grant, within four years. The program provides grants to students from families with low-incomes to attend college, and its full funding has been a top priority for WSA. Other victories include a student loan bill of rights, completion of a much-needed expansion of computer science slots at the University of Washington, and expansion of open educational resources to help students save money on collegiate course materials.

“The WSA aims to build a legislative strategy that increases the affordability and access of our public higher education institutions. Rep. Hansen has consistently offered his assistance to students who advocate in Olympia to reach this goal. His advice and leadership amounted to many great victories for students this year, including a plan to fully fund the State Need Grant over the next four years, which has been a top priority for our organization. We hope to continue working with Rep. Hansen and other higher education champions to continue building the quality of our higher education systems here in Washington state,” said Guillermo Rogel, Jr., WSA’s Executive Director.

WSA President Maresa Miranda said, “We are beyond thankful to the legislators who work diligently to support our students in Washington state. Year to year, Representative Hansen, as the Chair for the House Higher Education Committee, has worked closely with the Washington Student Association to ensure that students’ voices are represented in policy and budget negotiations. We are lucky to have a legislative champion such as Representative Hansen working within the Legislature who cares deeply about increasing the access and resources available to public higher education.”