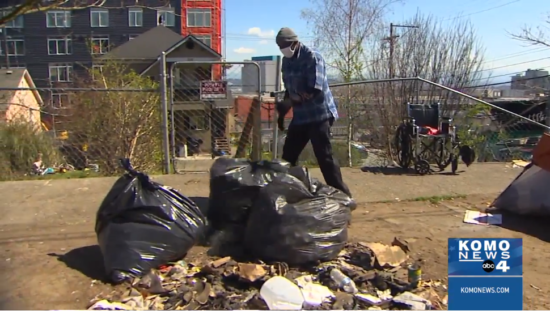 Tacoma launches program to pay homeless people to pick up trash, debris
Tacoma has launched a pilot program that will pay homeless people to collect trash and debris from public streets, an effort to remove garbage from city streets while providing jobs to the unsheltered. The initiative is the result of an effort by Tacoma City Councilman Robert Thoms, who thinks the effort will play big dividends. Continue reading at KOMO News.

Lawmakers move to outlaw fake ballot collection containers
It could soon be a crime to set up a fake ballot drop box in Washington. A bill making it a gross misdemeanor to misrepresent “an unofficial ballot collection site or device as an official ballot drop box” set up by a county auditor cleared the state House on Monday. A conviction can result in a maximum fine of $5,000 and 364 days in jail, or both. Continue reading at The Everett Herald. (Sue Misao)

Aberdeen Daily World
Confused about the new unemployment tax break? Here are some answers.
Walsh explains decision not to vote on gun legislation (Jinkins, Kuderer)
Commentary: Biden’s plan to upgrade almost everything — we’re worth it
Commentary: Seen through the eyes of others, George Floyd’s death, even more despairing
Gonzaga’s pursuit of perfection ends in out-of-synch showing

Columbian
Clark County sees 141 new COVID-19 cases, 1 death as numbers creep up
In Our View: Fair elections must be a bipartisan goal

Washington Post
In key showdown, U.S. judge tests prosecutors’ claims that Proud Boys leaders planned Jan. 6 Capitol breach
‘This is environmental racism’ How a protest in a North Carolina farming town sparked a national movement
The U.S. government approved trillions in aid. Many hard-hit families have yet to receive it.

KUOW FM
‘Kind of excited, kind of nervous.’ Seattle elementary students return to the classroom
Biden Envoy To Iran On What To Expect In Renewed Nuclear Talks