Family
Steve was born and raised in the 29th District, living in the same house in South Tacoma for over forty years before he and his wife, Beckie Summers, moved to Tacoma’s Fern Hill neighborhood in 2002. They have five adult children and eleven grandchildren.

Experience
In the House of Representatives experience and seniority matter, and Steve Kirby has plenty of both. As a senior House member and as Chairman of the Consumer Protection and Business Committee, Steve Kirby is widely regarded as one of the most influential voices in the legislature. He knows all the players without a program, but he’s managed to avoid all the petty partisan politics that stand in the way of good government. The fact is, he is well-liked by members of both parties.

Steve Kirby has a rich history of civic involvement. He was elected to the Tacoma City Council 40 years ago, at the age of 25, and served four terms. As a councilman he served on the Workforce Development Council Executive Board, the Tacoma-Pierce County Board of Health, the Tacoma Joint Municipal Action Committee, the Pierce Transit Board of Directors, and he was the first chairman of the Tacoma City Council’s Public Safety Committee. And because of his dedication to providing essential services to the people of Tacoma he was declared an honorary member of the Tacoma Firefighters Local 31, Tacoma Police Local 6 and Tacoma Library Employees Local 120. 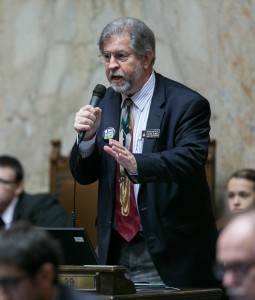 In addition to his official civic duties, Steve Kirby has been active in his community in other ways throughout his adult life. He has been a member of the Tacoma Athletic Commission, the Tacoma Executives Association, the Pierce County Democratic Central Committee Executive Board, the Pierce County Young Democrats, the Southeast Lions Club, the Southeast Tacoma Optimist Club, the South End Neighborhood Center Advisory Board and the City of Tacoma Community Development Advisory Committee.

Employment
Prior to the legislature, Steve Kirby was the Finance Director for the Sisters of Saint Dominic of Tacoma for ten years. During legislative interims, he works as Community Relations Representative at Harborstone Credit Union.