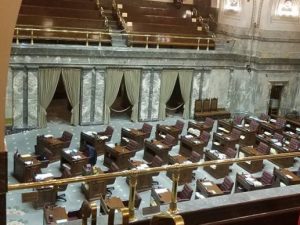 It has become clear that the legislature will need to go into overtime in order to get our work done this year. While making decisions about the state’s two-year budget is complicated, I am disappointed that Senate Republican’s haven’t even made a good faith effort to begin negotiating so we could adjourn on time.

The budget is important and we want to make sure that our values are upheld. House Democrats are focused on the state’s paramount duty: passing a budget that fully funds our public schools without devastating the safety net and higher education.

How we pay for that is important. I believe it would be wrong to make seniors and families shoulder the burden with the Senate Republican’s $5.5 billion property tax hike and massive cuts to state services.

Instead, the House has proposed reforms to make the tax system more fair and progressive. That includes much-needed B&O tax relief for tens of thousands of small businesses while asking the wealthiest in our state to pay their fair share to fund schools.

Senate Republicans publicly and repeatedly said they won’t negotiate with us. So now we are going into special session, which I’m not happy about.

It’s our jobs as lawmakers to solve problems and reach compromises. That can only happen if all parties come to the table and work in good faith. Senate Republicans are not doing their jobs.

I want to get the job done for you and the 1.1 million kids in our public schools.