This session began under the watchful eye of National Guard soldiers, because of the threat of armed protesters in the wake of the violent insurrection in Washington D.C. As I said in a previous newsletter, while all went well on in-person opening day in Olympia, I hope that we never have to start a session in this manner ever again. 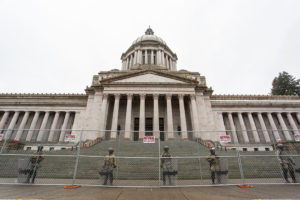 In order to help protect our institutions of democracy and ensure the safety of community members, I have introduced two common-sense pieces of legislation. The first, House Bill 1234, would ban weapons on the capitol campus and city halls. Unlike in a majority of other states, it is legal in Washington to openly carry AR-15s, AK-47s, and other deadly weapons on our capitol campus and in many government buildings. The second, House Bill 1283, expands the crime of criminal mischief to include openly carrying or displaying a deadly weapon in a threatening manner with three or more people.

In the last few years, we’ve seen an explosion of intimidation where democracy happens. People openly carrying assault rifles and showing up in tactical gear are not defending themselves from a credible threat. They are raising fear, chilling free speech, and creating danger for the public. Sadly, both research and real-life events have shown us that weapons in these high-emotion and crowded situations can be deadly. These two bills are critical tools for safety and will help hold people accountable when they use fear and intimidation to quell the free expression of democracy in our state.

Ensuring a Safe Environment for Each Student in our Schools 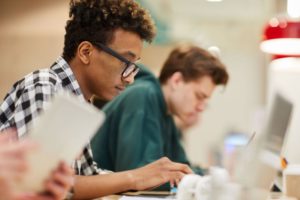 I have long been focused on creating safe, supportive school climates – from championing social emotional learning to increasing school counselors to creating school safety centers. So when a group of young people from Eastside 4 Black Lives approached me about not feeling safe in schools with school resource officers (SROs), I knew I had work to do. Our schools should be a safe environment for each and every students, and it’s an imperative to act when students of color express that they don’t feel safe.

Last year, the legislature took an important first step in creating education and student-focused training requirements for SROs. However, when we followed up with school districts to see how many had done the training, the data was just not there. We also discovered that many schools don’t use the title of SRO for their school safety staff, and those staffers were then unwittingly omitted from the training requirements. In order to improving school climate for each and every student, I’ve introduced House Bill 1214, which will extend training requirements including restorative justice, to all school safety staff, improve data collection and require school districts to introduce their safety staff and specific roles to students and families each year.

Holding Police Accountable to our Community

To increase police accountability, reduce the use of force and rebuild Washingtonians’ trust in law enforcement — especially in Black communities, which are disproportionately affected by police violence — Representatives and Senators have introduced a suite of bills on this topic.

Each of the harmful tactics these bills address contribute to division and distrust between law enforcement and the community and many have directly resulted in unnecessary death and injury to members of the public. Law enforcement cannot do its job if it has lost the trust of the community.

As always, whether in person or online, please don’t hesitate to reach out to me this session with your questions, concerns, or comments. We will get through these hardest of times together.