How to pass a bill in 8 simple* steps

But it is actually far more complex to get a bill passed. Every step of the way there are actions to take, people to persuade, and timing to be aware of.

Here is a brief glimpse at some of the intricacies that go in to taking a bill from introduction all the way to under the governor’s pen.

To become a law, a bill must: 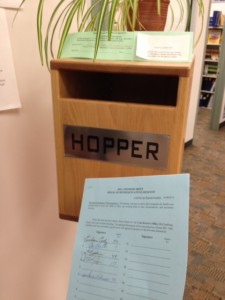 1. Be introduced: Before a bill is even introduced, you need to: come up with an idea,    find a Senator or Representative to sponsor it, draft the bill, gather signatures from other legislators and then introduce your bill by dropping it in the hopper.

2. Be heard in committee: Once your bill is introduced, it is assigned to a committee. You’ll need support from the Committee Chair if you want a hearing—or at least get them interested in hearing more. If your bill receives a hearing it’s an opportunity to bring in members of the public to show their support (this takes a lot of work!). 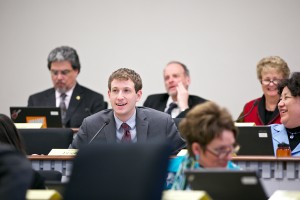 d out of committee: You’ll need to make sure a majority of the committee supports your bill or it won’t move forward. This means lots of meetings, phone calls and advocacy efforts.

4. Be pulled to the floor: This is where most bills meet a slow death. After a bill is passed out of committee it goes to the Rules Committee, which decides which bills will receive a vote. You’ll need to ask a member of the Rules Committee to conduct a “rules pull” so your bill can be voted upon. 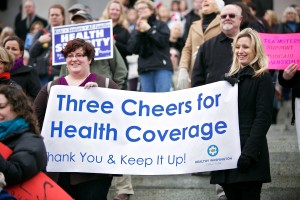 5. Pass out of the House or Senate: Once your bill makes it to the floor, you’ll need to make sure it gets a majority or it’s dead. This means even more meetings, publicity and advocacy efforts.

7. Be agreed upon by the House and Senate: Your bill needs to pass out of the House or Senate with the exact same wording. If that doesn’t happen because of amendments, it’s sent to a Concurrence Committee, a group of legislators who will try to reconcile the two drafts. This isn’t always easy, especially if it’s a contentious policy. If your bill makes it through this process, it goes to the Governor’s desk.

8. Be signed into law by the governor! 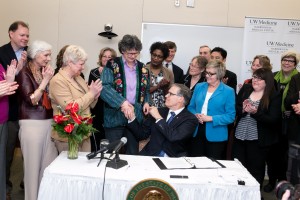 As you can see, passing a bill is difficult—and most bills that are introduced in a legislative session fail. Sometimes it takes years to get a policy passed. But when a bill finally does receive the governor’s signature, the feeling of accomplishment is unmatchable.

On that note, we are back in Olympia for the 2015 legislative session which began on Monday. We’re looking forward to supporting policies that prioritize Washingtonians—including access to health care, a clean environment, a strong education system and thriving economy.

We hope to hear from you about your priorities throughout the session. Please contact us any time!