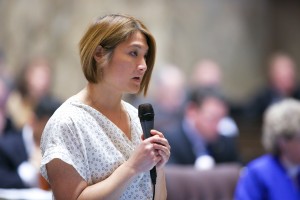 OLYMPIA – Today, in the House Committee on Labor, HB 1786, sponsored by Rep. Mia Gregerson, D-SeaTac, was voted out of committee with a “do pass” recommendation. The bill creates voluntary wage standards for aerospace companies if they want to take advantage of the preferential business and occupation (B&O) tax rate currently offered.

“It’s our responsibility as legislators to demand smart investments with taxpayer money,” said Gregerson. “The middle class is being left behind. It’s only common-sense that companies making millions in profits and taking millions in tax incentives should be able to pay their workers enough so they aren’t forced to visit the food bank to survive. We need a tax system that works for everyone, not just the wealthy few.”

There are currently 384 companies in Washington taking the preferential B&O tax rate. HB 1786 requires that if these companies would like to continue taking the preferential tax rate that within three years they pay each of their workers who has been employed for at least three years the statewide median wage – currently 19.67/hour. The bill has graduated requirements over the next three years allowing for reasonable phase-in.

“Washington’s aerospace industry has a long, proud history of sustaining family-wage jobs,” said Gregerson. Unfortunately, these wages have eroded over the last several years. In 2009, 32% of production workers in the aerospace industry made below $15/hour. In 2012 it was 38%. This is the wrong direction. I am hopeful that with this new legislation we can turn things around and begin to rebuild the middle class in our state.”

If companies do not want to pay their workers the median wage, they will simply not be able to take advantage of the B&O tax incentive. The difference between the two tax rates is 0.2%.Several other states have wage standards tied to tax incentives, including Oklahoma, South Carolina and Missouri.

HB 1786 will now likely head to the Finance Committee that deals with taxes and revenue.