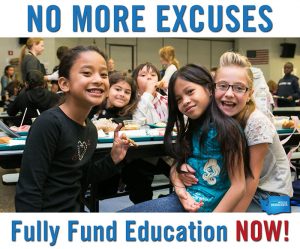 Although it passed the House with bipartisan support, early indicators suggest that the Republican-controlled Senate will not bring the bill up for a vote. If that’s the case, teachers will receive layoff notices in the coming weeks and crowded classrooms will become even larger. In short, public schools will lose roughly $358 million in funding for the 2017-18 school year. In our community, Mukilteo School District stands to lose more than $5 million, while Everett School District will lose more than $7 million.

Students deserve stability in their schools. Passing this bill makes sure that school districts aren’t held hostage while the Legislature finds long-term solutions to the school funding problem. I will urge my Senate colleagues to bring the Levy Cliff bill up for a vote, but I encourage you to make your voice heard!

Click here for a more detailed explanation of the levy cliff bill. 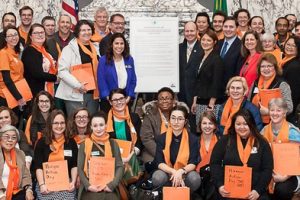 Hungry kids struggle to learn and for too many children meals at school are their only opportunity to eat. On Monday, Representatives joined Anti-Hunger advocates to highlight the problems of hunger and poor nutrition in school.

During the event, the House of Representatives adopted a resolution I introduced, recognizing the importance of combating childhood hunger, the economic and education benefits of connecting local farmers with schools and commending advocacy groups for their efforts to end hunger in Washington.

In conjunction with the resolution, House Democrats introduced a package of proposals to address. My colleague, Rep. Monica Stonier’s bill gives kids a chance to eat breakfast after the bell and eliminates co-pays for students that get reduced cost lunches. Another bill, sponsored by Rep. Marcus Riccelli, will help schools purchase equipment to make more food from scratch.

Other bills included engaging at-risk high school students in farming, extending the Food Policy Forum and conducting an economic study of the impacts of our in-state food supply.

My bill (HB 1047) that requires drug manufactures that sell drugs in Washington state to establish and implement safe drug disposal programs, had its first hearing on Tuesday!

It was heartening to see so many frontline professionals supporting this bill, including law enforcement, health care providers, suicide prevention experts and mental health counselors.