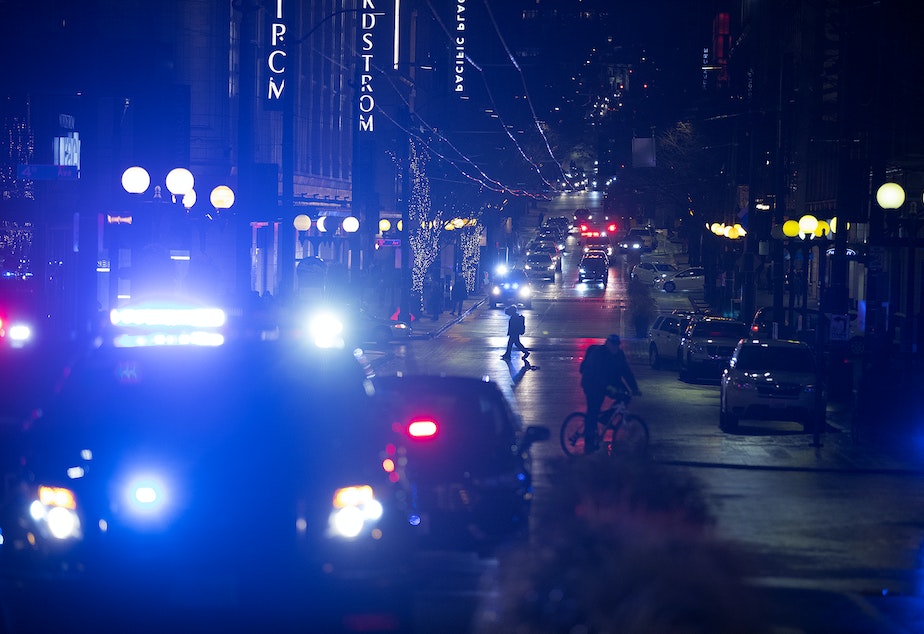 7 wounded, 1 dead in downtown Seattle shooting outside McDonald’s
Seven people were injured, and another killed, after at least two men reportedly shot at each other amid the evening rush hour in downtown Seattle Wednesday. It was the third shooting in downtown Seattle in two days. Police Chief Carmen Best said there were multiple shooters, although she could not say specifically how many. Just after 5 p.m., Seattle police reported a male suspect had fled the scene and police were searching the area around 3rd Avenue and Pine Street. They urged the public to avoid the area. Continue reading at KUOW. (KUOW photo/Megan Farmer)

Five new lawmakers sworn in for the 2020 state legislative session

Two state Senators and three new House of Representatives members were welcomed into their newly appointed positions for the 2020 legislative session in Washington this week. In the House, there are currently 57 Democrats and 41 Republicans. In the Senate, there are 29 Democrats and 20 Republicans. Here are the legislators who were newly appointed to fill vacancies that occurred through resignations and retirements since the 2019 legislative session. Continue reading at The Journal of the San Juan Islands.

Bill would eliminate statewide elections in off-years
A House panel is considering a measure that would eliminate elections in Washington state in odd-numbered years, with supporters arguing it would increase voter participation and opponents saying it would unfairly limit voters’ ability to file ballot measures. House Bill 2529 would permit elections in odd-numbered years in limited circumstances, such as special elections, including school levies or recall of a public official. By 2026, all local elections would have to switch to even-numbered years, though special elections could continue in odd years. State ballot measures, which are seen most years, could only be run in even years starting Jan. 1, 2021. Continue reading at Union-Bulletin.

Bellingham Herald (subscription required)
Want to work only 32 hours a week? There’s a push to make it a reality in Washington (Nguyen)
Two motels on Samish are slated to be demolished, making way for an apartment complex

Olympian (subscription required)
Engineer at controls during deadly train derailment near DuPont sues Amtrak
Seattle shooting kills 1, injures others, with at least 1 suspect at large, police say
You know that ferry moored at the Port of Olympia? It’s for sale — on eBay

Washington Post
As Democrats lay out their case, Trump and GOP press ahead with attacks
China expands travel restrictions to two more cities as virus outbreak continues to spread
Opinion: Just like with SARS, China is mishandling the coronavirus
U.S. readiness for a viral outbreak has improved, but there’s a long way to go
South Dakota bill restricting medical treatment for transgender youth passes first major vote
World leaders convene in Jerusalem to remember Holocaust, counter anti-Semitism
That text you got about a package isn’t from FedEx. It’s a scam.
Popular Obama portraits are going on a year-long U.S. tour
The Daily 202: One in 3 Republicans thinks Trump has probably acted illegally, but most don’t want him convicted
New Trump administration rule could make it more difficult for some pregnant women to get U.S. visas
The Technology 202: The U.K. is taking big steps to protect kids’ privacy. Advocates hope the U.S. will be next.
FICO changes mean 40 million Americans could soon see lower credit scores

Crosscut
Cash assistance for families has plummeted in WA, even as poverty remains high (Entenman, Nguyen)
Washington could become the next state to ban private prisons (Ortiz-Self, Saldaña)