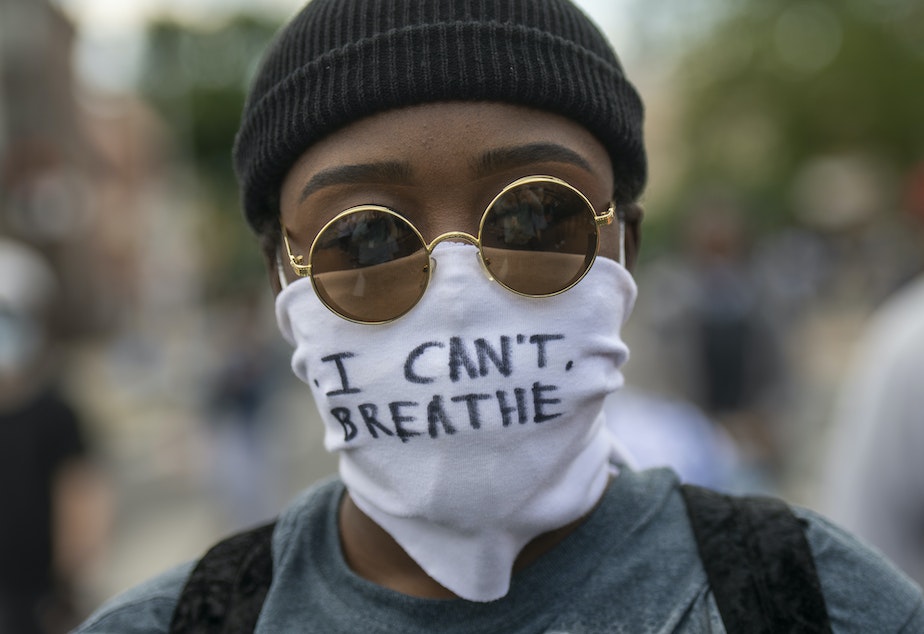 Protests Over Racism Versus Risk Of COVID: ‘I Wouldn’t Weigh These Crises Separately’
Mass protests that have erupted over police brutality toward black people in America are raising concerns about the risk of spreading the coronavirus. But some health experts, even as they urge caution, say they support the demonstrations — because racism itself also poses a dire health threat. Continue reading at KUOW. (Getty Images) George Floyd protests spotlight need for police reform, even in times of coronavirus
If the events of the past week have taught us anything, it’s that now is not the time to take our foot off the gas of police accountability. The devastating death of George Floyd, a Black man who died after being pinned beneath the knee of a white Minneapolis police officer, has sparked widespread protests nationwide, including fiery confrontations between protesters and police in Seattle on Saturday night. Continue reading at The Seattle Times. (Dean Rutz)

“We can’t allow violence to hijack peaceful protest,” Gov. Inslee says
Those who have committed violent acts during the demonstrations in Seattle and other cities “need to be criminally prosecuted as appropriate and they will be,” the governor said at a press conference. “We will not allow that to obscure the justice of the underlying protest; the peaceful protesters’ efforts to challenge all of us to raise our eyes on the prize to have a more just society.” Continue reading at The Bellingham Herald. (Steve Ringman)

Journal of the San Juan Islands
A look at COVID-19 contact tracing
Black Lives Matter protest in Friday Harbor, June 5
Prepare for the annual playwrights festival
Letter to the community from the superintendent

Seattle Times (subscription required)
Coronavirus daily news updates, June 2: What to know today about COVID-19 in the Seattle area, Washington state and the world
George Floyd protests continue in Seattle area; one turns chaotic on Capitol Hill
Inslee rebukes Trump for calling governors ‘weak’ over George Floyd protests
George Floyd protests spotlight need for police reform, even in times of coronavirus
Coronavirus has closed courthouses, stopped trials. How does Washington’s justice system come back?
Which phase is your county in? And what can you do under the modified Phase 1 of Washington’s reopening?
West Seattle Bridge is a surprise crisis, but plenty of other aging Seattle bridges are also vulnerable

Tri-City Herald
2020 Water Follies hydro races postponed for first time in 54 years
2 more COVID deaths in Tri-Cities. Fewer total deaths in May
700 food boxes to be given away June 3 in Kennewick
Demonstrators rally in Pasco for racial justice

USA Today
‘A national disgrace’: 40,600 deaths tied to U.S. nursing homes
Your next stimulus check could be higher, if the HEROES Act gets signed as House Democrats want
US coronavirus map: Tracking the outbreak

Washington Post
As nation convulses with fiery protests, leaders struggle to address deep racial despair
Trump, Congress face huge economic decisions over aid as country is rocked by protests
Trump threatens military action to quell protests, and the law would let him do it
The central feature of Trump’s presidency: False claims and disinformation
Election officials contradict Barr’s assertion that counterfeit mail ballots produced by a foreign country are a ‘real’ worry

Yakima Herald Republic
“Don’t shoot! Justice now!” Yakima marchers protest the death of George Floyd.
Health officer: Yakima County will need to wait on Phase 1.5, too, until metrics improve
Opinion: Surrounded by tech know-how, how did the state get scammed?

KUOW FM
12,000 COMPLAINTS FILED AGAINST SEATTLE POLICE AFTER WEEKEND OF PROTESTS
Updates on demonstrations in Seattle and Western Washington
News and updates on the Covid-19 pandemic in Washington state
Park Police Tear Gas Peaceful Protesters To Clear Way For Trump Church Photo-Op
‘He Did Not Pray’: Fallout Grows From Trump’s Photo-Op At St. John’s Church
An amazing feeling of solidarity, then the flashbangs
Nearly 26,000 Nursing Home Residents Have Died From COVID-19, Federal Data Show
What Is The Insurrection Act That Trump Is Threatening To Invoke?
White House Coronavirus Testing Czar To Stand Down
‘None Of This Is True’: Protests Become Fertile Ground for Online Disinformation
George Floyd Independent Autopsy: Homicide By Asphyxia
Protests Over Racism Versus Risk Of COVID: ‘I Wouldn’t Weigh These Crises Separately
Trump Weighing Options On Protest Response, White House Official Says
Attorney General Steps Up Federal Law Enforcement Response To Protests