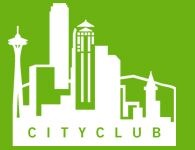 I am heading into my fourth week as a legislator representing the 46th District (Northeast Seattle, Lake Forest Park, and Kenmore) and so far it has been both exhilarating and humbling. Every day I learn more about how to be of service to my constituents and participate in the great American experiment of self-governance.

One of the best experiences thus far has been on the Early Learning and Human Services Committee, working with The Mockingbird Society, a foster care advocacy organization, on legislation that would make it easier for siblings in the foster care to visit each other.  During the hearing on the legislation a former Mockingbird Society participant spoke passionately about the emotional hardship that he and his twin brother faced being separated from their sister throughout childhood.  His testimony really drove home the issue for many members of the committee.

I had the opportunity to help CityClub develop its Colleen Willoughby Youth Civic Education Awards, which recognizes outstanding programs that help young people get involved in changing and impacting our society, which the Mockingbird Society received in 2012. I knew before the great work that they do in the community, but it was a true privilege to be able to work with them down in Olympia as well.

I will say though, the Early Learning Committee could easily be renamed the “guilty mother committee” – with me as the mother who feels guilty!  I’m the mother of a two year old son and a four year old daughter, and it is difficult to be away from them so much. We spend a lot of time in committee studying the research that is being done on early childhood education, and the results are compelling and conclusive –  the first 1000 days of life, from birth to three years old, are absolutely critical for the development of a child.  I know this first hand, as I teach my own two kids to acquire physical skills, literacy, and social graces.  I know my husband, their care givers and I are working hard to nurture them but it is a challenge during these 105 days of session!

But as challenging as that is, I think it’s important to have moms down here in Olympia. Every year the legislature passes bills that affects kids, parents and families. We need the perspective of those who are on the front lines trying to take care of their kids and give them the very best when we are making these major policy decisions

Thank you for being engaged public citizens!