The state will step up to its responsibility to educate public-school students and will make sure college graduates are ready for high-demand jobs under the budget proposal released by the House Democratic majority on Wednesday.

The budget proposal authored by House Appropriations Chair Ross Hunter, D-Medina, dedicates more new funding to education than either of the budget plans released earlier by the Senate Republicans or Gov. Inslee.

“This is an honest, straightforward budget that meets our constitutional obligation to our schools,” Hunter said. “Investments in education will bring jobs and a stronger economy to Washington.”

The $34.5 billion plan dedicates $1.9 billion in increased spending to K-12 education. That includes a big step toward meeting the 2018 deadline set by the state Supreme Court last year in the McCleary decision, which directed the Legislature to substantially boost school funding in order to pass constitutional muster.

Other highlights of the proposal include: 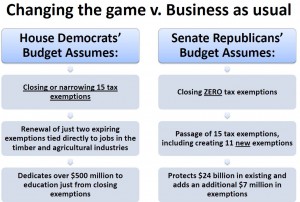 The plan calls for the closure of 15 tax exemptions and the extension of some existing taxes to help fund the almost $2 billion dollars for schools, including the closure of loopholes for oil refineries and the sales-tax exemptions for non-residents and janitorial services. The recent Senate proposal closed zero exemptions while creating an additional 15 loopholes.

“The McCleary decision is a game-changer,” said House Finance Committee Chair Reuven Carlyle, D-Seattle. “This proposal represents a fundamental change in the way the state does business.”

Currently the state has over 640 tax exemptions on the books that amount to tens of billions in foregone revenue every year. Recently, the Joint Legislative Audit and Review Committee and the Citizen Commission on Tax Preferences have called for the closing or expiration of many of those exemptions.

“We started this session focused on amply funding our schools,” said House Majority Leader Pat Sullivan, D-Covington. “I’m proud of this budget – it represents a real commitment to meeting our paramount duty without devastating other vital state services.”

The budget will be considered by the Appropriations Committee in a public hearing at 3:30 p.m. in Hearing Room A in the John L. O’Brien Building. 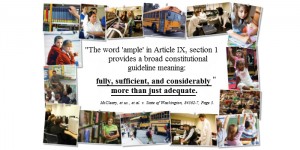