Rep. Gregerson was sworn in and took her seat on the House floor for the first time Jan. 13, as she joined two other Democratic newcomers in the Legislature for the 2014 session. 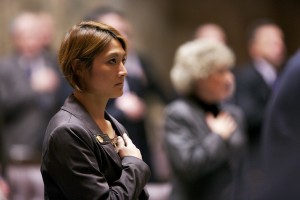 Rep. Gregerson was appointed late last year to fill the unexpired term of Dave Upthegrove, who was elected in November to the King County Council.

The Olympian newspaper reported on the new members in an article updating legislative activity on Day 2 of the session.