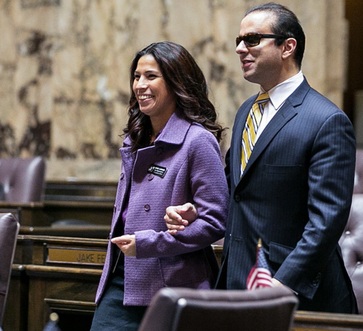 Representative Stonier and I at the Opening Day Ceremonies

We kicked off the 2014 Legislative Session and got right down to business with a rare first day vote! Setting the bar high for a productive session; I’m proud to say that I voted once again to pass the Washington State Dream Act.  The House of Representatives is sending a strong bi-partisan message to the Senate that every Washingtonian deserves access to an affordable higher education and the many opportunities it provides.

This past week, the House also passed the Toxic-Free Kids and Families Act, again with strong bipartisan support.  This bill bans six toxic chemicals that are known carcinogens. Originally added to household products to increase fire safety; research shows that the chemicals actually make household fires more lethal by increasing the toxicity in the smoke inhaled by firefighters, first responders and victims. No parent should ever have to choose between their child’s health and their safety – especially when we know that there are non-toxic ways to meet our fire standards.

I am very excited to have introduced HB 2023, which opens the door for Equity Crowdfunding in Washington State.  Washington entrepreneurs need easier access to capital, and individuals in our state should have the opportunity to invest in these local startups.  This bill, which passed out of the Business and Financial Services Committee unanimously, will help entrepreneurs from myriad sectors get off the ground and drive a thriving economy.

Read what the Seattle Times had to say about this important proposal here.

Recently there has been lots of discussion surrounding taxis, ride sharing, and alternate transportation methods. This year, I introduced HB 2152, which makes L&I optional for Taxi drivers. Due to the changes in status of worker classification, these sole proprietors are required to take this extra insurance on themselves.   The aim of this bill, which passed unanimously out of the Labor and Workforce Development Committee, is to lower the cost of daily operations for Taxi drivers, resulting in lower meter rates for customers. 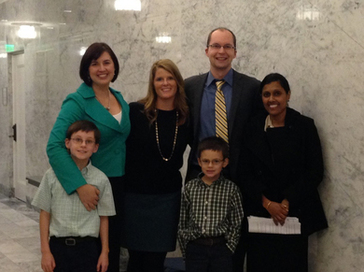 Last week the House Health Care and Wellness Committee voted to pass another one of my bills, HB 2153. This proposal is especially important to me because it’s great illustration of how ordinary citizens can impact the greater community by involving themselves in the legislative process. The primary proponent of this bill, Jeff Schwartz, is a constituent of mine in the 48th District.

Jeff’s younger son, Jacob, had a rare gastrointestinal disorder that caused his body to reject solid food. Jacob needed a particular type of formula to get nutrition, but when his insurance company stopped covering the formula, his family was forced to pay over a thousand dollars a month out of pocket.

HB 2153 would require insurance companies to cover the powder-based formula that Jacob and other kids suffering from the same disorder need to survive. This bill, which passed out of committee with overwhelmingly bi-partisan support, would provide families like Jeff’s with access to the healthcare they need.