HB 1840, signed into law by Governor Inslee today, was the only gun safety bill to pass the legislature this session. 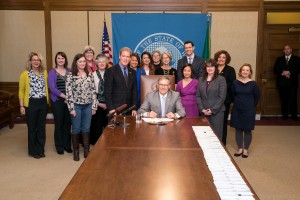 Sponsored by state Rep. Roger Goodman, HB 1840 aligns Washington state law with federal law by removing firearms from those subject to protection orders.  Under federal law, when a protection order is issued against a domestic violence offender he must surrender his firearms.  Current state law allows domestic abusers to keep an arsenal of weapons.

Rep. Goodman said, “At the most volatile time in an abusive relationship, offenders will be required to surrender their firearms.  It just makes sense to take deadly weapons out of the equation. If the protection order expires or is lifted, or if the offender is acquitted, firearms rights are then restored.”

Victims, survivors and advocates have long called for the removal of firearms from domestic violence offenders. More than half of the homicide victims in this country are women killed at the hands of their intimate partners, usually with a firearm.

“Domestic violence is about control; the abuser controlling the victim’s life,” said Grace Huang, Public Policy Coordinator for the Washington State Coalition Against Domestic Violence. “For some victims, getting a protection order is the first step in taking their lives back. And that’s threatening to the abuser and where we often see guns come into play.”

But it took several tries before a compromise could be made with the gun rights lobby. The passage of this bill has come after years of hard work by advocates and legislators.

“Changing this law will literally save lives,” said Rep. Goodman. “It will give law enforcement and the courts the ability to disarm known dangerous people; and it will bring peace of mind to those in danger. This bipartisan compromise and common sense approach is a victory for everyone.”