House Democrats spent a significant amount of time last session analyzing the safety risks posed by oil train traffic and developing policy solutions to address the issue. While the problems remain very real, a new issue has come up regarding oil-by-rail: its effect on agriculture. 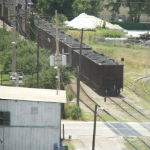 Cold Train Express, one of the major movers of Washington state agricultural products based out of the Port of Quincy, has announced that they will no longer be shipping fruits, vegetables and other foodstuffs to the Midwest. The decision came after BNSF Railway opted to increase the number of trains moving coal and oil along the line from three to six per day, making it impossible to move other products in a timely or reliable manner.

The lack of refrigerated rail shipment will force Washington growers to switch to long-haul trucking to move their wares. In addition to increasing costs for farmers, this will also result in more highway traffic and an increase in greenhouse gas emissions.

Growers aren’t the only ones on the losing end of this decision; the Seattle Times reported last month the oil train traffic is also causing financial problems for Washington’s grain farmers.