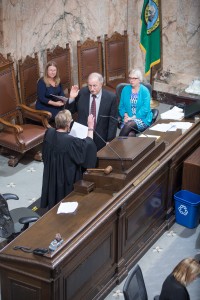 He shares vision of equality and opportunity for state residents

OLYMPIA – Rep. Frank Chopp (D-Seattle) was elected by his peers to serve as Speaker of the House.

In his acceptance speech, Chopp focused on two themes: equality and opportunity –concepts, he said, that are fundamental to the success of all people, not just a select few.

Chopp used education as an example of a “great equalizer,” because regardless of where children come from, a good education gives students from all backgrounds a level playing field to reach success.

“It shouldn’t matter whether your parents drove you home from the hospital in Lexus or a Chevy pick-up truck,” Chopp said in emphasizing his point that all children deserve the chance for a great education.

However, Chopp said a child’s success in school is dependent on more than just adequate school funding.  Almost one in five children in Washington are living in poverty, “often without the resources they need to be healthy and ready to learn,” Chopp said.

“The odds are rigged against kids who come to school sick, hungry or homeless,” he said.  “We must address poverty if we are going to solve the achievement gap and improve school graduation rates.”

Chopp also highlighted other top priorities for the House Democrats this session including making higher education more accessible, fixing a broken mental health system, raising the minimum, and investing in our state’s infrastructure.

Chopp closed his speech by saying investments in increasing fairness and opportunity for people is proven to deliver powerful results. But the Speaker cautioned, “If there is no investment, there can be no return on investment.”

The full text of Speaker Chopp’s speech can be found here: https://housedemocrats.wa.gov/frank-chopp/speaker-chopps-opening-day-remarks-2/