Back in November, KING 5 reported that Seattle Police Department’s records show that in a little over a decade, 1,641 rape kits were booked into evidence. But only 365 were tested, just 22% of the total.

These figures prompted Rep. Tina Orwall, D-Des Moines, to write a bill requiring every rape kit gets submitted for testing within 30 days. House Bill 1068 was heard in committee yesterday. Special Investigations Prosecutor Rick Bell flew in from Ohio to tell lawmakers in Olympia about the successful results of testing rape kits that were sitting on shelves.

KING 5 interviewed Orwall after the hearing: 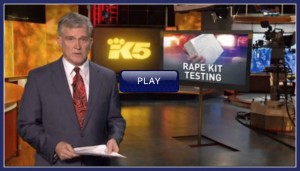