“Even today, women are paid 80 cents for every dollar earned by men for similar work,” said Rep. Senn. “It’s time to revisit this issue so we move quickly toward gender pay equity in the workplace.” 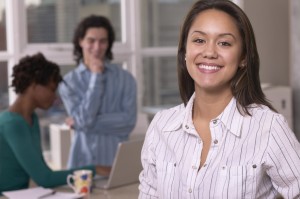 Data collected by the U.S. Census Bureau and the Pew Charitable Trust shows that 40 percent of households in America rely on a woman as the leading or sole breadwinner. Income disparities limit a woman’s ability to sufficiently provide for her family. This disparity in pay leads to higher rates of poverty among women and children.

“The idea for this bill was not created overnight,” said Cleveland, the bill’s Senate sponsor. “My grandmother’s generation fought for the right to vote, my mother’s generation began the fight for equality and we are still having the same discussions over income equality for women today. As a mother, I hope that for my daughter and for the generations of women to come that this issue will be addressed. Let’s start today.”

The legislation proposed by Cleveland and Senn will require employers to provide a valid reason such as, education, training, or experience to validate disparities in pay.

The bill will also provide protections for employees by stating that an employer may not:

Many organizations discourage employees from discussing their compensation. This act permits workers to discuss their pay. These conversations will allow all employees to better understand their positions and determine if they are indeed being paid unfairly. 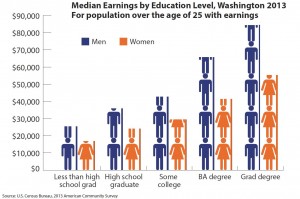 “This bill is aptly named the Equal Pay Opportunity Act. The availability of information about salary and job opportunities provides more of an opportunity for fair pay,” explained Senn.

The existing Washington State Equal Pay Act has not been updated since 1943. Much has changed in society and in the workplace over the last 72 years.

“Our society still consistently undervalues women’s work and contributions, even all these decades after our state banned wage discrimination,” said Marilyn Watkins, policy director of the Economic Opportunity Institute in Seattle. “Unequal pay leaves big holes in family budgets, makes it harder for local businesses to prosper, and means women get less in retirement, too. The EPOA will help women get ahead, and also help to change our culture so that women get the pay and opportunities they’ve earned.”

Currently, Washington state is ranked 21st in the nation for having one of the highest wage gaps. The issue of pay equity has gained more attention as women in the United States demand equal pay for equal work.

“We have the ability to put our ideas into action,” said Cleveland. “I am a proud sponsor of this bill that helps correct the injustice of income inequality.”

The Equal Pay Opportunity Act will be introduced in the House and the Senate as companion bills within the coming days. The bills will need hearings and to pass each chamber of the Legislature before heading to the governor’s desk to be signed into law.
[portfolio_slideshow id=14201]