OLYMPIA—Parents and children who’ll be helped by the ABLE Act came to the state capitol to join Gov. Jay Inslee he signed the bill into law.

“If you believe in pathways to independence, if you believe in incentivizing saving and planning, this is the bill in which we can get that done,” said Rep. Christine Kilduff (D—University Place), author of House Bill 2063. 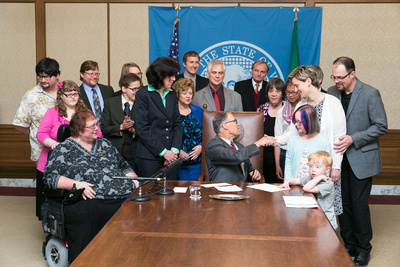 The ABLE Act will allow individuals with disabilities to invest funds in a tax-free account, known as a 529a, to cover qualified expenses such as education, housing, and transportation without counting against an individual’s eligibility for benefit programs. It’s similar to the 529a accounts used to save for college tuition.

“First and foremost, it is critical that we empower individuals with disabilities to reach their full potential—because every person has the ability to contribute,” testified U.S. Rep. Cathy McMorris-Rodgers (R—Spokane), long-time champion of the federal act. “I was proud a being a part of getting the ABLE Act through Congress. It took many years and was a broad, bipartisan effort, Republicans and Democrats.”

For parents like Amy Patterson, the bill hits close to home and will help provide a brighter future for her daughter, Emma.

“She has goals and dreams for her future,” Patterson said, “and we want to help her achieve them. Thanks to the ABLE Act, she doesn’t have to give up those dreams.” 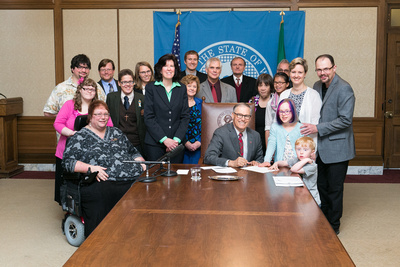 For interviews or more information:

For broadcast-quality audio or to arrange TV or radio interviews:
Dan Frizzell, 360-786-7208