The following is a statement from House Appropriations Committee Chair Ross Hunter (D-Medina) in response to today’s order from the Washington State Supreme Court:

“The Supreme Court released a new order in the McCleary case this morning, holding the state in contempt and fining it $100,000 per day (to pay for basic education) until it resolves the remaining issues, including both the unconstitutional dependence on local levies to pay for basic education personnel costs and the cost of construction of new classroom space. They also expressed concern about the pace of the phase-in of class size reductions.

“It’s important to know that the phase-in plan in the budget we passed this year completely pays for the class size reductions called for in the McCleary order. The court recognized the work done by the Legislature in funding class size reductions, but seems to be concerned about the phase-in of lower class sizes.  There is some confusion in how the cost of this investment is described in various documents, and we will work with the court to clarify this. The attached chart shows the level of funded class size and those recommended by the task force the court refers to.

“House Democrats proposed a joint process to resolve the personnel cost issue with the Senate and Governor’s office and passed legislation (HB 2239) putting the process in place on June 26th. The Republicans in the Senate refused to take up the bill or offer any alternative.

“I share the court’s concern about finalizing the plan sooner rather than later. Governor Inslee has called a meeting of all four caucus leaders for Monday to create a public process to resolve these issues expeditiously.” 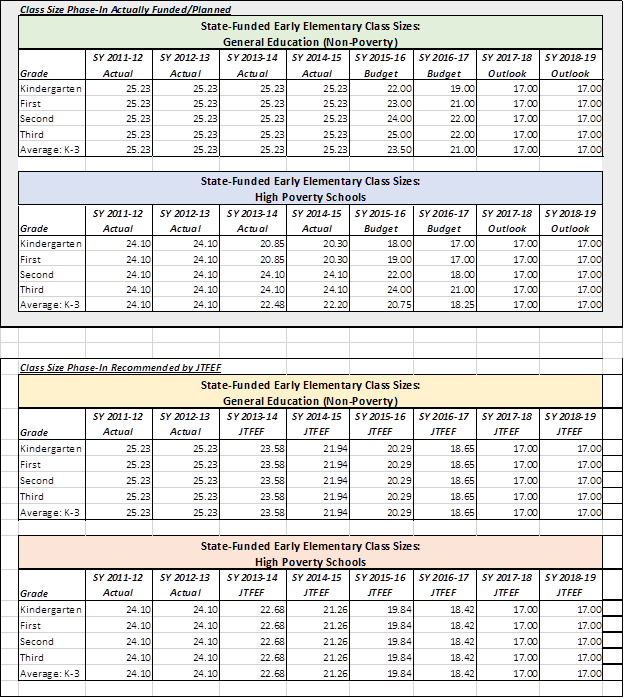