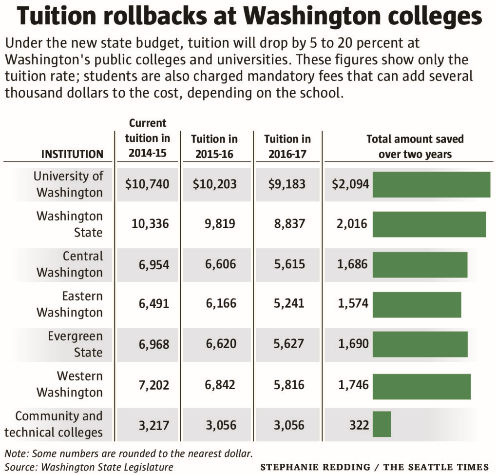 Cutting tuition for all students

Years ago, college students worked every summer to save up for that year’s tuition.

You can’t do that anymore. Your average college student could work a full-time job, all year, and not have enough to cover tuition, room and board.

This is why most students who drop out of college before getting their degree aren’t failing academically. They’re struggling financially.

It doesn’t have to be this way.

Our state’s economy runs on brainpower and depends on a strong system of colleges and universities.

This year, the budget we passed actually cuts tuition for the first time in our state’s history.

The original proposal from Senate Republicans would cut tuition for students at UW and WSU while raising tuition for the 60 percent of Washington college students who attend community and technical colleges.

In the House, we fought to make sure tuition got cut for every college student.

In the first year, tuition is cut at least 5 percent for all public colleges and universities. Overall, tuition will go down 15 percent at UW and WSU and 20 percent at regional universities like Western, Eastern, Central and Evergreen.

GET goes through changes

If you bought pre-paid tuition through the GET program, years of sharp tuition hikes followed by the first-ever cut in tuition have made many people wonder about the future of the program.

I’m happy to report that I’ve been appointed to the Legislative Advisory Committee on Advanced Tuition Payment, which deals with the GET program.

Parents worried about losing money, or credits, should know that the GET program passed a number of changes, including offering refunds. Click here for more information about those changes and options.

Washington is in need of STEM graduates. From Boeing to Microsoft, Amazon to REI, Washington is a proven leader in many “STEM-educated” fields. House Democrats led the way in fighting for additional program expansions. This year’s investments in our intellectual infrastructure include: