OLYMPIA – Friday, January 29 marks the 7th anniversary of President Obama signing the Lilly Ledbetter Fair Pay Act into law, reaffirming the rights of individuals who have suffered from pay discrimination.

In Washington State, our equal pay law has not been updated since 1943. House Bill 1646, sponsored by Rep. Tana Senn (D-Mercer Island), would prohibit wage nondisclosure agreements and ban retaliation against employees for discussing or inquiring about wages.

“Many women have no idea they’re earning less than their male coworkers for doing the same job and with the same experience,” explained Senn.

On average, a woman working in Washington earns just 77% of her male counterpart’s salary, even when their seniority, experience and education are taken into account. This income disparity is dramatically worse for women of color.

In more than 20 states, including California and Oregon, laws banning pay secrecy policies already exist. These laws allow employees to openly discuss and inquire about wages without fear of retaliation.

“We run the risk of falling behind other states as we compete for a highly skilled workforce,” Senn said. “More personally, I want my daughter to feel that no matter what field she goes into, she’ll be evaluated and paid fairly based on her work, not her gender.”

HB 1646 was approved by the State House of Representatives in 2015 but did not reach the floor of the state Senate for a vote. The bill has again been approved in committee and is scheduled to return to the House floor next week.

Rep. Tana Senn will be available for media questions at the following times: 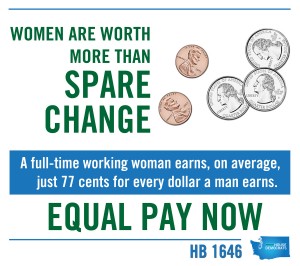 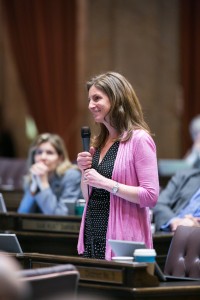