We’re heading into the home stretch of the 2016 legislative session with each chamber considering bills passed by the other. The heavy lifting around the three budgets (operating, capital and transportation) is coming soon. Here’s the latest developments:

“When I grow up, I don’t want to live in a world where women are paid less,” explained my 10-year-old daughter Rachel, clearly and passionately during her testimony at the Commerce and Labor Committee hearing last week on my legislation, HB 1646. (She had been looking forward to testifying on the bill since the session started!)

At its heart, pay equity is about fairness. Two people with the same

education, experience and training doing the same work should be paid the same. It is fundamentally unfair if one person earns less based on their gender. We must be sure women who discuss or inquire about how much they make or about any wage differential do not face retaliation. Pretty simple, right?

Unfortunately, the bill failed to pass out of the Senate committee and pay discrimination will continue to persist in Washington unabated for another year.

But this fight isn’t over. I strongly believe in the equality of women and look forward to reintroducing the bill next session.

If you’re looking for more information, there are two great articles that recently came out about this year’s legislative effort, one in GeekWire, and one in Crosscut.

Our government is based on a system of checks and balances. That’s why the House, Senate and Governor draft proposed budgets reflecting their own priorities. Our job as legislators is to find common ground for the good of our state. As this is the second year of a two-year budget cycle, we must focus on making any needed mid-course corrections and address emergency issues. 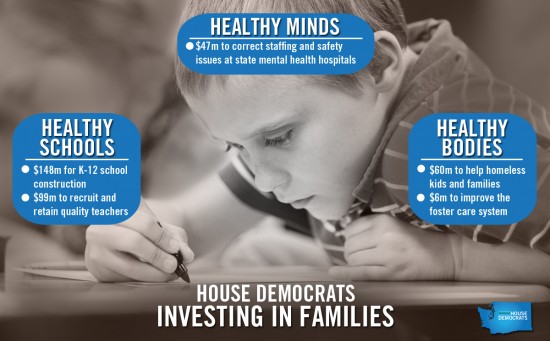 The House and Senate budgets offer vastly different visions for moving our state forward, or backward:

At this point is session these are still proposals, and budget negotiations are happening as we speak, so be sure to stay tuned.

Gov. Inslee recently signed an executive order creating a Blue Ribbon Commission to explore developing a new state agency that would coordinate services provided to children and families. Currently, the majority of those services are provided through the Washington Department of Social and Health Services (DSHS) and Department of Early Learning (DEL).

As a mother, I recognize that children need strong, dedicated advocates working to ensure their needs are met. They also need a strong voice in the Governor’s Cabinet. DSHS is a large, multi-faceted agency that does a tremendous amount of good for Washington citizens. But its size also limits its ability to focus specifically on just one group. Oftentimes kids are dealing with homelessness, food insecurity, disabilities, early learning needs, access to health care, and foster care issues all at the same time. By creating an agency that’s kid-focused, rather than service-focused, we can achieve the best results for Washington’s youngest.

I’ve enjoyed meeting with all of the constituents who have made it down to Olympia this session. If you’re planning on visiting the legislature, please be sure to reach out to my office to schedule some time for us to meet.