The Centers for Disease Control estimate that approximately 1 in 6 boys and 1 in 4 girls are sexually abused before their 18th birthday. That is shocking and tragic. Unfortunately, many incidents go unreported because children are afraid to talk about these traumatic experiences.

Teachers are often the most likely adult to be told or to notice that something is wrong, which is one of the reasons they are mandatory reporters of sexual abuse.

But there’s a problem.  While schools in Washington have plans for recognition, initial screening, and response to emotional or behavioral distress in students, those plans only include indicators of possible substance abuse, violence, and youth suicide: Not sexual abuse. So teachers are required to report possible sexual abuse but schools currently don’t have a procedure in place on precisely how to go about reporting.

That’s why I supported a bill by my colleague, Rep. Tina Orwall, which strengthens child and family protections by adding sexual abuse to that list.

House Bill 2597, which passed both chambers unanimously, is awaiting Governor Inslee’s signature. The bill directs school districts to have plans that include parental notification requirements, staff response procedures for allegations of sexual contact or abuse, and training on their obligation to report physical abuse and sexual misconduct. 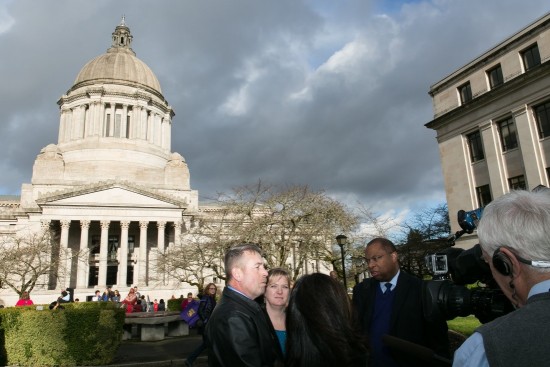 Sheena’s father, Gary, and her best friend, Kristin, have been fierce advocates in Olympia for Sheena’s Law

For the last few years, I’ve joined my colleagues in prioritizing improvements in our broken mental health system. Some of the actions we have taken include restoring funding for cuts to mental health made during the Great Recession, improving processes for treatment of mental health crises, and providing more options to law enforcement and families to get their loved ones the care they need.

One new tool that has passed both the House and Senate is Sheena Henderson’s Law, sponsored by my friend Rep. Marcus Riccelli (D-Spokane). The bill would give police officers a new tool to indicate when they feel someone needs to be evaluated by a mental health professional, but doesn’t meet the criteria for involuntary commitment.

The bill was inspired by the story of Sheena and Chris Henderson. Chris had suffered from a series of mental health crises for months and had been contacted by police, who couldn’t detain him under current law. Unfortunately, one day in the summer of 2014, Chris took his gun and killed his wife, Sheena, and then took his own life.

Sheena was a nurse and a loving wife and mother. Her family wanted some good to come of her death and have been advocating for this new law for the past two legislative sessions. Having an option to require mental health providers to speak to individuals like Chris and determine if they need additional care will help law enforcement in these types of situations and avoid future senseless tragedies.

We have reached the final stretch before sine die—our last day of legislative session– and much of this time will be spent in “concurrence,” resolving differences in bills as they passed out of the House and out of the Senate.

As you may remember from civics, a bill must pass out of both chambers in the same form for it to make it to the governor’s desk. Since House bills may have been changed in the Senate or vice versa, concurrence gives legislators the opportunity to deliberate on bills in their newest form.

Legislators from either chamber can work together to try to find compromises on amendments of contention in conference committees. If the conference committee can come to a consensus, it presents a report to each chamber, which then must be adopted for the bill to pass.  If the report is only adopted by one house, the bill does not pass.

Concurrence gives legislators the opportunity to argue their case and make compromises one last time before session closes.