OLYMPIA – As more families and cafeterias move toward convenience in the kitchen, the art of scratch cooking and providing access to fresh fruit, vegetables, and other nutritious foods have fallen by the wayside. Now, with a rising diabetes epidemic and children classified as more obese than any other time in our nation’s history, Washington has taken a major step forward with the Healthy Kids-Healthy Schools grant that was approved by the state legislature. The grant provides funding for schools in three areas: Physical activity and physical education, water bottle filling stations, and nutrition, including kitchen and cafeteria upgrades based on legislation sponsored by Rep. Marcus Riccelli (D – Spokane). 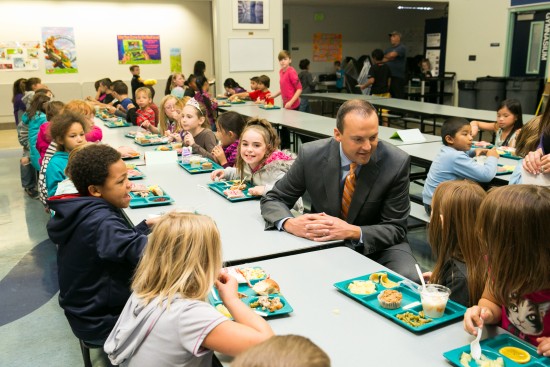 “Our kids need healthy food from an early age to get them on the right path to healthy lifestyles. By teaching them to eat right, we can make a real difference in the lives of our children and the cost of health care for our nation in the future,” said Riccelli. “I am proud of all the work we’ve done to ensure healthy families and healthy communities in Washington, but this is just a start. As we get our school kitchens back online, we can begin introducing scratch and modified scratch cooking and rely more on locally sourced food. It’s a win for kids and for our local growers.”

Riccelli sponsored legislation to create the Apple a Day Grant. Despite not passing into law, the language was inserted into the capital budget and moved forward to the governor. Because of Riccelli’s efforts, local schools, including Arlington, Audobon, Bemiss, Browne, Cooper, Finch, Garfield, Grant, Linwood, Logan, Longfellow, Madison, Regal, Roosevelt, Sheridan, Westview, and Whitman Elementary schools, will receive between $1,346 and $31,686 in cafeteria and kitchen equipment upgrades.

The state received far more grant applications than could be fulfilled with the funding provided. In the nutrition section, for kitchen and cafeteria upgrades, the state had over $4.52 million requested but could only provide $1.8 million in funding.