May 5, 2017
The Governor signed HB 1543! This is an important measure to ensure sexual assault survivors are not forced to co-parent with their rapist. 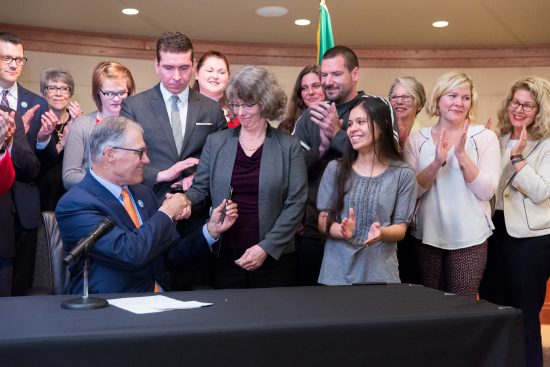 April 21, 2017
The Senate approved an amended version of HB 1543 by a vote of 49-0. The House concurred with those amendments, meaning the bill is now headed to the governor for his signature. Here’s a link to the bill as it passed the Legislature.

March 29, 2017
An amended version of HB 1543 was approved by the Senate Committee on Law & Justice. It now awaits consideration by the full Senate.

March 22, 2017
HB 1543 is scheduled for public hearing in the Senate Committee on Law & Justice at 8:00 a.m. You can watch my testimony before the committee in below:

HB 1543 is scheduled for executive session in the House Committee on Judiciary, February 9 at 1:30 p.m. (Subject to change). (Committee Materials)

HB 1543 would close a current gap in state law that forces some mothers to co-parent a child that was conceived from a rape.

Rep. Doglio’s bill would create a court process that provides rape survivors with a legal pathway to prevent or restrict the rapist’s parental rights by presenting clear and convincing evidence that the pregnancy was a result of the rape.

“Going through a sexual assault is already traumatic enough,” said Doglio. “The Legislature needs to protect rape survivors by giving them a legal pathway to terminate the parental rights of their attacker. No mother should be forced to co-parent with a rapist father.”

Rachel Gropper from Franklin County told her story to the House Judiciary committee. Rachel was drugged and raped when she was 18.

“I had a sexual assault protection order before a parenting plan,” said Gropper. “I am now forced to co-parent with the man who raped me and it’s very unfair.”

Nearly four out of ten women who become pregnant from a rape decide to carry the pregnancy to term. For the women that decide to keep the child, they do so knowing there is a real risk of possibly co-parenting the child with the rapist due to insufficient legal protections for rape survivors.

Having these legal protections in place will help ease the pain of what is already a difficult, emotional, and trying time for rape survivors.

You can listen to Rep. Doglio’s testimony before the House Judiciary here.

Additional testimony on the bill can be viewed here.