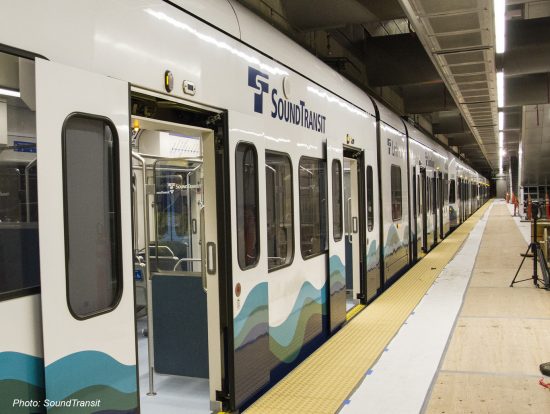 For many of you getting your 2017 car tab bill, there was some sticker shock. The passage of Sound Transit 3 added an additional tax to the annual fee you pay with car registration. That is a heavy burden to pay for some.

The people of the region voted in favor of ST3 and lawmakers must respect the will of the voters. However, those car tab fees are based on an old evaluation model that nearly everyone agrees over inflates vehicle values. This is a problem that needs to be resolved.

Lawmakers are looking at ways to reduce the car tab burden without delaying or killing the mass transit projects that voters approved.

Sound Transit 3 is incredibly important. Our economy and population are both booming, which is causing bad traffic jams to get worse as more and more people use the same roads, buses and trains.

The economic development and improved infrastructure of Sound Transit 3 will move people around faster and safer and be a huge boon to local businesses. ST3 is the future of transit in the Puget Sound and it absolutely must move forward.

There are legitimate concerns, however, with using the 1996 MVET schedule. The 1996 MVET schedule is less accurate. In 2006, the Legislature approved a new schedule, which isn’t currently in use by Sound Transit, but is much more accurate. It also tracks closely to Kelley Blue Book depreciation as found by the Seattle Times.

We can’t force Sound Transit to stop using that 1996 MVET schedule without significant costs or potential litigation. Sound Transit has already bonded some of the funding for ST3 and undoing that is timely, complicated, and costly.

So, what are our options?

Let’s be clear about what House Democrats are not proposing: We’re not forcing Sound Transit to use the newer car tab schedule. We’re not reducing (or changing) the valuation used to calculate car tabs. We’re not forcing them to cut projects. In fact, we’re telling them not to. 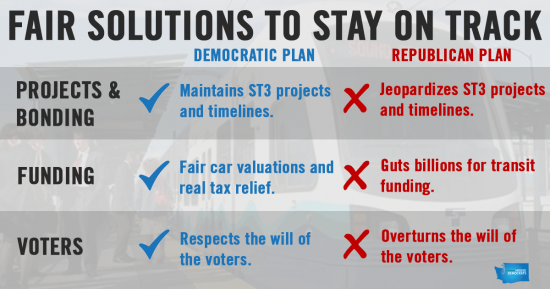 Over the last 5 weeks, House Democrats have developed this legislation, in an attempt to lessen the burden on working families without hurting transit projects the public voted for last year.

We believe Sound Transit can make these changes and continue with the ST3 plan.

This will cost about 1.5 percent of the overall budget for Sound Transit 3 project over ten years. Sound Transit can explore their options, of which they have many, and come up with a solution that works over the next decade. There is no requirement other than this: let people pay a little less for a fairer depreciation schedule.

How to do it is up to Sound Transit. We have provided a few ideas, but ultimately they get to choose.

What’s fair is fair. People deserve to have the light rail they voted for and they deserve to be paying car tabs that accurately represents the value of their car.

The alternatives are simple and terrible: either let people pay inflated values or allow Republicans to dismantle Sound Transit.

Democrats are supporting a path that puts more money back into people’s pockets without hurting the light rail projects we desperately need in our region.