I am pleased to report that the House and Senate reached agreement on a paid family leave program and voted on it last week. I joined 64 of my House colleagues in voting for the bill, which the Senate also passed with strong bipartisan support, and the Governor signed it earlier this week. 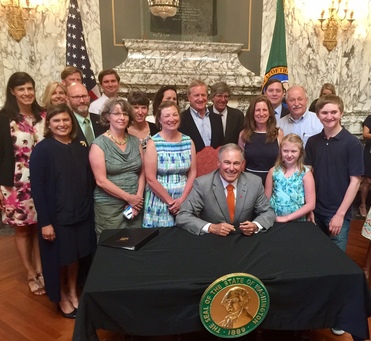 The Family and Medical Leave Insurance Program will:

I am proud to have supported this bill and am proud that Washington will become the fifth state in the nation to guarantee paid family leave.

I am disappointed that the legislature was unable to reach an agreement about car tabs and Sound Transit 3 this session. I have heard all year from many constituents who have concerns about this issue, especially with the use of an old valuation model that is inaccurate and does not reflect a vehicle’s true value. I have co-sponsored several bills to fix this valuation problem and increase transparency and accountability in Sound Transit.

According to the Seattle Times, the proposed new valuation system is far more accurate and tracks closely to the Kelley Blue Book depreciation.

While we did pass the budget last week, we are still in session working on several pending issues, but we are not in Olympia every day. So if there’s something in your mind that you’d like to discuss, or you just want to meet for coffee, feel free to schedule an appointment by calling the district office number, 206-556-3195, or email me at Derek.Stanford@leg.wa.gov.