I am excited to share that The WA Voting Rights Act (SB 6002) passed out of the House this week. This landmark piece of legislation is an important step to ensure democracy exists within our state. I am the prime sponsor of the House version of this bill (HB 1800). My January E-Newsletter goes into further detail on the Washington Voting Rights Act – feel free to give it a read!

We all know that voting is a fundamental American right. However, far too often, we find unnecessary barriers getting in the way of citizens who want to cast their ballot. The more engaged and educated our fellow citizens are, the better the outcomes for our democracy – that is why The WA Voting Rights Act is so important. We will not be reducing what is required of people to cast their vote. You still have to be 18 years of age, a resident of Washington, and a citizen of the United States. We are simply removing barriers that prevent the adequate representation of communities and their residents.

Below are updates on other bills that ensure an enriched democracy in Washington State by increasing voter participation. 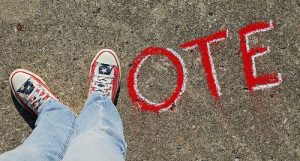 Young people are more likely to become engaged voters when they get involved early in their life. That’s why I am proud to be supporting House Bill 1513 to allow 16 and 17 year olds to pre-register to vote when they get their driver’s license or permit.

Studies show that preregistration increases youth turnout by 2-13%. In 2012, in Washington, about 80% of registered youth turned out and actually went to the polls. HB 1513 will reach young people early to help create lifelong voters.

The biggest predictor of whether someone will vote or not is if they are even registered in the first place. With House Bill 2595, people would be registered to vote automatically if they have accessed certain services at the Department of Licensing and the Health Benefits Exchange. The bill also funds a study to look into other ways to increase registration.

Analysis shows automatic voter registration boosts numbers of registered voters as well as turnout in elections. HB 2595 would take Washington from being an opt-in system to an opt-out system, which will make voter registration more secure and cost effective. To be clear, no one is being forced to vote or return a ballot and eligibility requirements remain the same. Automatic voter registration has already passed in nine states (including the rest of the West Coast, Colorado, Georgia and West Virginia) and is being considered in 32 other states around the nation.

As it gets closer to election day, people tend to be more engaged and interested in voting. But under our current law, the deadline to register to vote is 29 days before the election, leaving many people unable to vote because they miss the deadline. Under SB 6021, a person can register in person up to 8:00 pm on the day of the election. Many states that have enacted same day voter registration have seen significant increases in voter turnout.

Removing barriers to voting helps increase participation in our democracy and ultimately creates a more robust and representative government.

As many of you have heard, last week the legislature passed a bill related to public records. Washington state has made great strides over the years to improve public transparency of the legislative process.

And members of the public are free to observe official committee meetings and floor debates in-person.

Over the last few years, we have heard the concerns of reporters, editorial boards, and open government advocates that the legislature is not transparent enough. These concerns have led to a court case, and in order to avoid further costly litigation, lawmakers have approved a bipartisan measure to address many of the concerns regarding a need for additional transparency from the legislature.

The measure we approved last week (SB 6617) is the largest expansion of legislative records being opened to the public in over two decades. Once the bill goes into effect on July 1, 2018, more legislative records will be subject to public disclosure, including:

Lawmakers are striving to be more transparent, but there are still aspects of our work that must remain private, which we have protected in this legislation:

This is a first step, and I believe it strikes a fair balance between protecting constituent privacy and striving for a more open government. While I don’t support the quick manner in which this bill was passed, I do support making our legislature more transparent. The bill is far from perfect, but it’s an excellent step in the right direction. I am open to continue looking at how we can ensure the legislature operates in a way that is more transparent.

Thanks for coming to our town hall