OLYMPIA – Governor Jay Inslee signed House Bill 2578, which protects low-income renters against discrimination because they receive rental assistance. Before, landlords could reject prospective tenants because they receive housing subsidies, even if they have good credit, no criminal history, and full-time employment.

In response to these discriminatory practices, Rep. Marcus Riccelli (D – Spokane) introduced House Bill 2578. This act prohibits landlords from refusing to rent to someone because they receive housing assistance.

“I don’t think it’s a surprise to anyone that Washington is having a housing crisis. Part of the problem is that renters who receive help can struggle to find somewhere to call home,” said Rep. Riccelli. “These hurdles just add to what has become a serious problem. This is just one of a list of actions we’ve taken this session to tackle Washington’s housing problem.”

“Housing is the first and most critical need that must be met for individuals and families,” added Sen. David Frockt (D-Seattle) a sponsor of source-of-income discrimination legislation in the Senate. “Very little can be helped when people are not in stable housing situations. The innovative aspects of this statewide policy, forged through consensus and compromise with the landlord representatives, ushers in a new era and a model for the country. Without a doubt, we need more affordable housing supply.  But we also have housing assistance vouchers in place for a reason. This law will ensure that they are actually used in the private rental market, which is critical to addressing this crisis.”

Sen. Mark Mullet (D-Issaquah), who helped usher the bill through the Senate, thanked all stakeholders for coming to the table in good faith. “I am proud that Washington was the first state to partner with private landlords to ban source-of-income discrimination in a way that works for both renters and landlords,” said Sen. Mullet.

At the signing, Gov. Inslee expressed appreciation for the legislators who worked on the bill.  “I want to thank Rep. Riccelli and everybody who’s worked on this bill for some period of time.  It’s really a great step,” said Inslee. 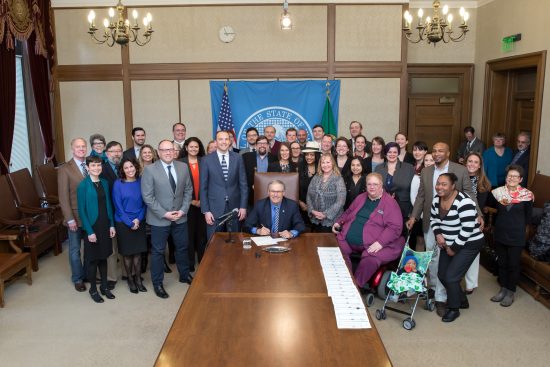