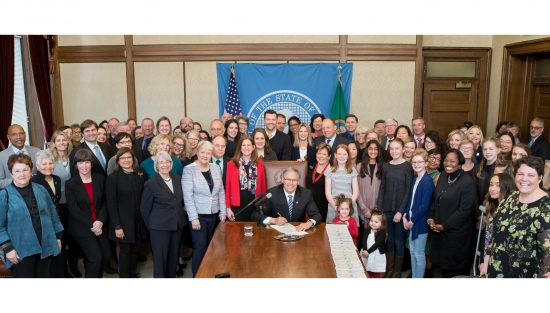 Washington was one the first states in the Union to address the wage gap by passing the Equal Pay Act in 1943.  Washington is making history again by adding additional provisions aimed at closing the gap between what women and men are paid.

“With this bill, Washington State is not only updating our 75-yr old equal pay law, but once again leading the country with equal pay policy,” said Rep. Tana Senn, D-Mercer Island, prime sponsor of House Bill 1506 and longtime advocate for women’s rights. “Protecting women from bias in career advancement opportunities is a new step to help battle equal pay disparities.”

“It’s unfortunate we have to even have this debate and legislation that makes it clear that equal pay for equal work is the right thing to do and, thanks to this bill, now it is the law,” said Governor Inslee before thanking Rep. Tana Senn and proceeding to sign the bill.

Senn’s legislation will allow employees to talk about their earnings with co-workers and ask for equal pay, without fear of backlash or retaliation. The measure offers remedies for employees who are paid less for similar work on the basis of gender.

Rep. Tana Senn introduced and successfully passed a version of this bill in the House only to see it die in a Republican-led Senate three years in a row. This session, there was bipartisanship and good will in both chambers. The House passed it on a 70-28 vote and, with Democrats back in the majority, it passed the Senate on a 36-12 vote.

The Equal Pay Opportunity Act updates the state’s equal pay law for the first time since its inception by, among other things:

During the legislative process, advocates were concerned that the legislation could be watered-down by adding preemption provisions. Fortunately, the final legislation signed by the governor does not prohibit local governments from adopting and enforcing their own anti-discrimination measures.

With the Equal Pay Opportunity Act in statute, working families will thrive, women will be in better financial shape when they retire, Washington businesses will become more competitive and the state’s economy will be strengthened.

“With this bill, women in the workforce will benefit today and well into retirement. For our young girls and boys, we are sending the clear message that we in Washington State value them equally,” Senn added. 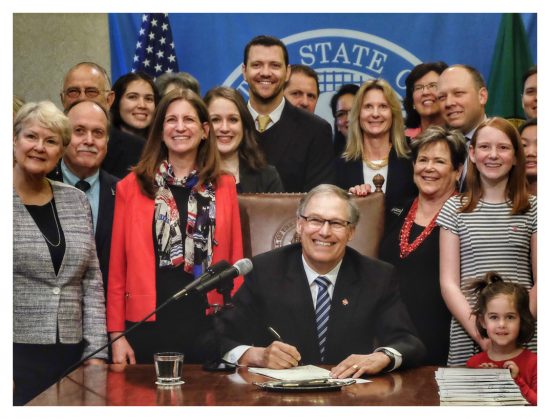