King County will challenge legality of I-976
King County Executive Dow Constantine is preparing to file a legal challenge against Initiative 976, which was approved by voters across the state in the Nov. 5 election. A press release from the Executive’s office on Nov. 6 said Constantine asked the King County Prosecuting Attorney’s office to prepare a lawsuit challenging the constitutionality of I-976. The initiative promises $30 car tabs, but could result in more than $100 million in cuts to Metro services between 2020 and 2025. Continue reading in the Auburn Reporter.

Inslee postpones future transportation projects after voters approve I-976
Gov. Jay Inslee has taken immediate action after voters approved an initiative that would slash car-tab fees. The Associated Press called the measure Wednesday. After a second round of results were released Wednesday, 55.76% of voters are approving Initiative 976 and 44.24% are rejecting it. Continue reading at King5.com. 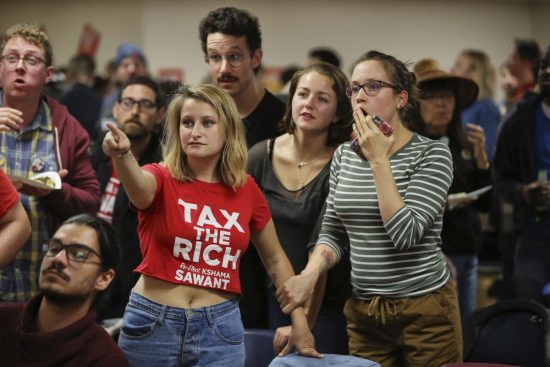 Amazon’s spending in Seattle Council races doesn’t deliver
Amazon poured $1.5 million into an effort to overhaul Seattle’s City Council this year. It didn’t deliver. Though many votes remain to be counted, early returns suggest the online retail giant and other business interests will have fewer obvious allies on the Council than at any time in recent memory. Continue reading in the Skagit Valley Herald.

Columbian
In Our View: Elected officials must work to preserve the law (I-1639)

Everett Herald (subscription required)
Updated 2019 general election results for Snohomish County
Leads widen in close races with many ballots left to count
Voters deliver a win for Eyman and concerns for Democrats
They came to the college from 16 countries, but this is home
Editorial: Questions remain after voters demand $30 car tabs

News Tribune (subscription required)
Pierce County sends a message to Sound Transit with vote on the I-976 car-tab measure
Lacey utility customers urged to check credit/debit cards after website hacked
Large water purveyor set to acquire Rainier View, which serves Gig Harbor, Puyallup
When that house next door is set to become apartments, what can you do?
Parkland-Spanaway area to get new $6.1 million crisis center to serve mentally ill
Editorial:  Pierce County is cynical about transportation funding. I-976 results prove it. But there’s a ray of hope
Column:  Don’t let Trump make you numb to what’s unacceptable

New York Times
U.S. and China Agree to Roll Back Some Tariffs

Washington Post
Barr declined to hold news conference to say Trump broke no laws in Ukraine call
Bolton is said to be willing to defy White House and testify if court clears way
Trump lashes out at lawyer for whistleblower
Walgreens handled nearly 1 in 5 of the most addictive opioids at height of crisis
Uber employees can finally sell their stock. They won’t be as rich as they hoped
Opinion: The Berlin Wall fell 30 years ago. Its shadow looms large.

Crosscut
Salmon on Prozac? A new study will look at what King County’s wastewater chemicals do to fish and orcas
2019 election results for Seattle, King County and more
‘The ship’s going down’: After I-976, Washington officials fear for the future of transportation
Opinion: The death of Seattle’s self-declared wokeness

Seattle P.I.
Little sign of a Seattle City Council flip in latest vote totals
King County will prepare lawsuit to block ‘devastating’ I-976
Tom Douglas restaurant workers to get $2.4M settlement
Seattle School Board election: Winners get little pay, lots of duties
Surgeon implants electrodes in patient’s brain in attempt to cure severe opioid use disorder
How much space will $1,500 get you in Seattle today? A lot less than it used to
City braces for drivers leaving tolled SR-99 tunnel starting Nov. 9