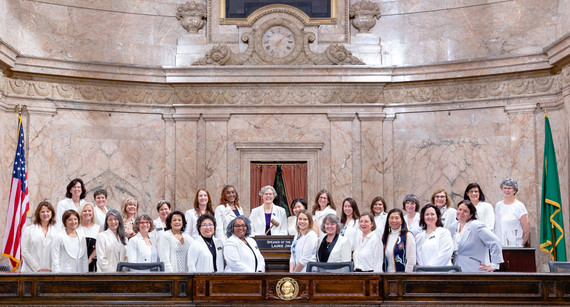 The 2020 session begins with a new face at the House rostrum: Speaker Laurie Jinkins! I was proud to vote yes on the House floor last week for Washington’s first-ever woman and out lesbian speaker of the House. It is the first time in nearly two decades that a new speaker takes the gavel. Members of the House wore white in honor of the suffragettes who fought for women’s right to vote. I was proud to stand among them.

In her opening day speech, Speaker Jinkins said that while her title may be speaker, she sees her primary job as listening. She also made clear her commitment to equity and inclusion, and to expanding opportunity for all people in our state.

This is an exciting new chapter for the legislature and for our state. I look forward to working with Speaker Jinkins to pass good policies that put people first and help communities across Washington thrive.

Read more in the Seattle Times

First statewide ‘Office of Equity’ passed by the House

What’s next for transportation after the car tabs initiative?

The passage of Initiative 976 means a loss of more than $450 million in revenue for the state transportation budget.

It’s true that the initiative is being challenged in court. However, that trial hasn’t started yet, and whoever loses the trial will appeal it all the way to the state Supreme Court. We probably won’t know the initiative’s final fate until this summer, long after lawmakers finish work during this short 60-day session.

Changing an initiative is also politically difficult, since it takes a supermajority vote to modify an initiative right after it passes and the Republicans are unlikely to provide those votes.

It’s also a myth—despite what you may have seen in the 2019 voter’s guide—that we can simply tap the state rainy day fund to replace the missing funds.

The rainy day fund is meant for the operating budget, which pays for public schools, colleges, parks and non-transportation costs. There are also protections in the state constitution that prevent lawmakers from spending the rainy day fund without a supermajority vote and certain conditions, like an economic recession.

All of that means that the transportation budget has to be balanced, now, however painful the cuts or project delays might be.

It’s not pleasant, and it’s not what any of us want. We need more investments—not less—in highways, transit, ferries and trains to reduce traffic gridlock on our highways and get people where they need to be.

After the fate of I-976 is decided by the state Supreme Court, we need to talk about how to work together and find innovative ways to keep Washington moving.