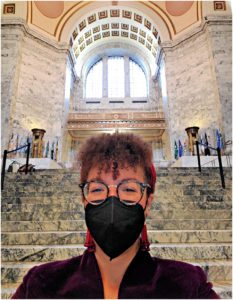 OLYMPIA—Monday marked the first full day in the Washington House of Representatives for newly-sworn in Representative Kirsten Harris-Talley, D-Seattle. Rep. Harris-Talley was elected in November 2020 to represent Washington’s 37th Legislative District, covering Southeast Seattle, Skyway and part of Renton. She was sworn in on Friday in a virtual ceremony for House members.

For her first term in office, Harris-Talley will serve on the House Environment & Energy and Finance Committees, along with the Children, Youth and Families Committee where she was named vice chair.

“I’m excited to get to work with my colleagues to rebalance our upside down tax code, deliver environmental justice for my district which has some of the worst water, air and soil quality in the state, direct growth management into a future free of racist land-use practices, and to bring an anti-racist abolitionist voice to the table as we work to create a system where all kids are prepared for healthy, fulfilling lives,” said Harris-Talley.

“Families in the 37th District are reeling from the economic crisis caused by the COVID-19 pandemic. Our state has more than enough resources for working people and families to thrive, but it’s being hoarded at the top. Black, Indigenous, people of color, immigrant and refugee communities, and small businesses especially need relief from regressive taxation,” she continued. “I’m focused on building support to make sure progressive revenue options like capital gains, not only pass the House, but make it all the way to Governor Inslee’s desk to make sure wealthy Washingtonians contribute to the success of the rest of Washington.”

Harris-Talley also noted that she’s been deeply involved in youth justice movements in Seattle. “I am a mom, a progressive, an activist, and now I bring the voice of my community to Olympia as state representative,” Harris-Talley said. As vice chair of the Children, Youth & Families Committee I’ll lead with the principles of the No New Youth Jail movement. There’s a direct line between modern incarceration practices and the white supremacy system of slave patrols that sought to control and contain Black people in the south.”

The 37th Legislative District is home to several environmental justice organizations that Harris-Talley has partnered with in her more than 20 years as a community activist in South Seattle. Citing her excitement to serve on the Energy & Environment Committee, Harris-Talley said, “People in our community are fed up with paying a high price for decades of environmental degradation from heavy industry. To them, it’s no surprise to know they live in some of the unhealthiest corners of our state. After all, they were redlined into those so-called less-desirable areas in the first place.”

“The Our People, Our Planet, Our Power report makes it clear that people fear how climate change will impact not just future generations, but those of us here right now. Our efforts at climate action will fail if low-income people continue to be displaced to places that lack resources needed to live. It’s about affordable housing. It’s about access to healthy foods. Climate change impacts every aspect of our lives, and we need to work harder and faster to protect our environment and grow our economy with green jobs.”

The House of Representatives met in person in Olympia today to elect the speaker of the House and to pass rules allowing the remainder of the legislative session to be conducted remotely in accordance with public health requirements for social distancing and gathering limits.

“Like all my colleagues in the House and Senate, I wish circumstances allowed us to do our work together and in person. I’m confident that the virtual nature of this legislative session will actually increase the power of everyday Washingtonians to have a say in their government. Now that people in South Seattle don’t have to take time off work and lose income to travel all the way to Olympia to be heard, they’ll have equal say as high paid and high powered lobbyists who do it for a living,” said Harris-Tally.

She also commented on the smooth operations of the opening day session saying, “I’m very grateful to all who worked hard to keep our workplace safe from those intent on causing harm.”

The legislature meets for 105 days in odd-numbered years and will adjourn on April 25.