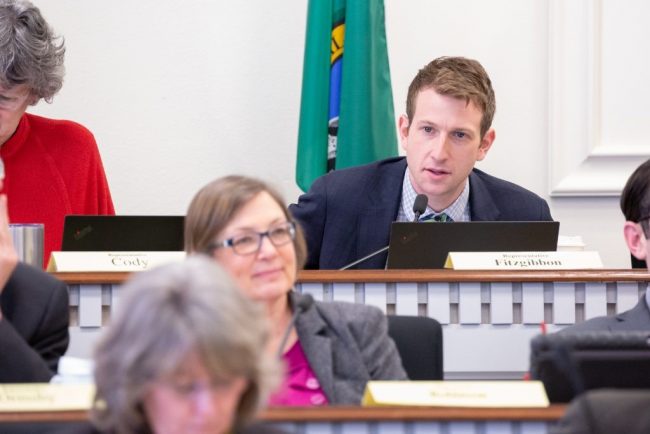 Rep. Joe Fitzgibbon was elected to represent the 34th Legislative District in 2010. He chairs the House Environment & Energy Committee and sits on the Appropriations Committee, the Rural Development, Agriculture & Natural Resources Committee, and the Joint Committee on Energy Supply & Energy Conservation. He also chairs the Select Committee for Pension Policy. Prior to his election, Joe served as a legislative staffer and as the Chair of the Burien Planning Commission.

Joe has sponsored and helped to enact laws reducing Washington’s greenhouse gas emissions from transportation, electricity, refrigeration, and buildings; improving marine habitat protections for salmon, orcas, and forage fish; and promoting smart growth and transit-oriented communities. He has also helped increase funding for transit and promoted criminal justice reforms to right the wrongs committed in the war on drugs.

His awards include 2015 “Legislator of the Year” by Washington Conservation Voters, as well as the “Community Champion Award” from Futurewise, a nonprofit organization focused on smart land use laws.

Joe grew up in Burien and now lives in West Seattle. He enjoys hiking, cooking, traveling, and playing with his dog.