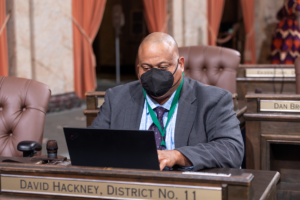 Representative David Hackney was first elected in 2020 to represent the 11th Legislative District in the Washington House of Representatives. He serves on the Capital Budget (vice chair), Public Safety, and Transportation Committees.

My family’s history is this country’s history. My paternal grandfather, George, was a Pullman Porter and a member of the Brotherhood of Sleeping Car Porters—the first African-American union in the United States. As a result of the protection of his economic and civil rights by his union, he made the improbable journey from an impoverished agricultural worker to the Black middle class during the depression. My maternal grandfather, John, was a sharecropper. He moved north during World War II as part of the Great Migration of African Americans fleeing the Jim Crow south. He later joined the United Automobile Workers union, where he made tanks and later freight trucks for 37 years, without missing a day of scheduled work. I am very proud of the accomplishments of my grandparents.

I was born in Cleveland, Ohio, the youngest of three. My father had a job that required us to move frequently. By the time I entered college, I had attended five different schools in three states. My family stayed just long enough to make friends and join the community, before we packed our bags and moved to the next city.

Neither of my parents completed college, but they did everything in their power to make sure my siblings and I received a quality education. This meant moving to neighborhoods that they could barely afford to ensure my siblings and I went to good schools. At the time, I didn’t fully appreciate the sacrifices my parents were making, and my grades suffered. When I got to high school, my grades were so low that the school assigned me to remedial classes. Fortunately for me, my parents demanded that I take college prep classes.  As a result of love and guidance from my parents, I buckled down on my studies, excelled in high school, and received scholarships and financial aid to attend Cornell University.

During my Senior year of college, my family experienced a healthcare crisis. My mother was diagnosed with terminal cancer.  Shortly after my mother’s diagnosis, my father was temporarily laid off as part of a corporate merger, causing a break in our family’s health insurance. When my father resumed work, the company refused to provide health care benefits for my mother, because she had a “pre-existing condition.” My sister dropped out of college to take care of our mother, and the healthcare costs crippled our family financially. I nearly had to drop out as well, but the university President provided me a personal loan so I could complete my senior year. I am proud to say I graduated with 20 job offers and have paid the President back in full.

Several years passed and I went to Harvard Law School, because I realized that I could positively impact people’s lives through the law. While in law school, I also earned my Master degree in Public Administration from the JFK School of Government at Harvard. After graduating, I began my legal career as an Assistant United States Attorney for the U.S. Department of Justice, where I tried more than 20 criminal jury trials including homicide, narcotics, fraud, tax, and bank robbery cases. During my 11 years at the Department of Justice, I also taught trial advocacy at the National Advocacy Center, and at the United Nations Mission in Kosovo.  I also took a leave of absence from the Department of Justice to work for the UN in The Hague, Netherlands as a war crimes prosecutor.  At the UN, I was a member of a trial team that convicted a detention camp commander of crimes against humanity.

After my time working for the UN and Justice Department, I spent several years working with companies to bring broadband to rural and economically disadvantaged communities. I then had the privilege of serving as the Senior Counsel for Global Human Resources at The Nature Conservancy, the largest Non-Profit organization in the world dedicated to preserving the environment.

The last several years I have had the opportunity to devote myself even further to causes I believe in. In 2018, I joined the Boards of Tabor 100 and the Alliance for Gun Responsibility Foundation, where I advocate in the state of Washington on behalf of civil rights and responsible gun laws, respectively. In 2019, Governor Inslee appointed me as a Commissioner on the Washington Human Rights Commission, and I am currently an Adjunct Professor at the University of Washington School of Law.