We are in week four of the 105-day legislative session. Here is a snapshot of what I have been working on here at the Capitol.

Send us your teen for a week! 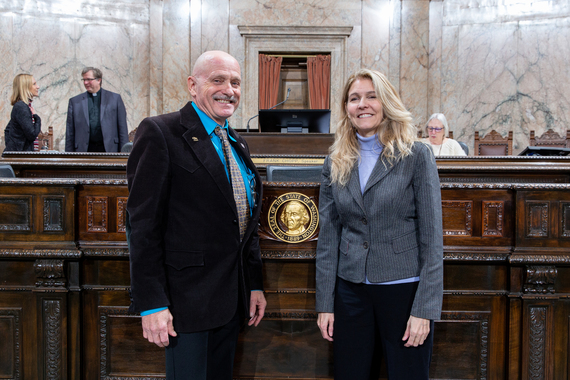 This week I am reaching across the aisle to solving problems around airport noise pollution and protecting against wildfires. I have been working with Rep. Tom Dent from the 13th Legislative District to co-sponsor these bills:

Washington State has been a leader in addressing the public health crisis of suicide, but much more work is needed to fortify our school system’s ability to provide services for students with mental health concerns.

For youth aged 10 – 19, suicide is the second leading cause of death. The Centers for Disease Control reports that since 2007 suicide rates among 10 – 19 year olds increased by 56 percent .

Mental health issues are one of strongest predictors among adolescents for engaging in self-harm and suicidal behavior. Despite 1 in 5  Washington students having a diagnosable mental illness, only one-third of that 20 percent receive mental health services.

Another bill I’m very excited about is my bill relating to addressing language access in public schools, HB 1130.

The Office of the Education Ombuds reports  that roughly 85% of school districts serve students with non-English home languages. The Office of the Superintendent of Public Instruction (OSPI) reports that 11.1% of all students are enrolled in the Transitional Bilingual Instruction Program, and more than two hundred different languages are spoken in students’ homes.

Our own local school districts reflect these statistics.

Despite this imperative, students of color and English as a second language (ESL) students continue to underperform on achievement tests and are over-disciplined comparative to their white peers.

Despite the urgent need to improve student outcomes, many immigrant and refugee families have difficulty communicating with their children’s schools.

This legislation would provide the OSPI with the staffing capacity to implement and monitor Language Access in schools in consultation with community advocates and diverse families. To address the shortage of qualified interpreters, the State Board of Community and Technical Colleges will convene a workgroup including interpreters, educators, language access experts and families to create a curriculum for interpreters.

To enable all communities to support their children’s education, families need to learn their rights and schools need the tools to engage all families. It’s not only the right thing to go, but it’s the law.