Steps Toward Fixing the Unemployment System

On Friday the House passed SB 5061 which takes important steps to correct serious problems with our unemployment system. During the pandemic we have relied on the unemployment insurance system to support many workers whose employers were unable to operate safely. With this bill we are ensuring that employers are not unduly punished because they were not able to operate, and we are raising the minimum benefit for workers who have been stuck without work.

Over the past month, I’ve met several groups of small business leaders in Skagit County and Bellingham, as well as the Anacortes Chamber of Commerce and the Association of Washington Businesses. In every case, unemployment insurance rate increases were a high priority. Without this correction, those employers would automatically be hit with significant rate increases, at a moment when many small businesses are struggling. That’s why this change was supported by businesses and labor advocates alike.

I want to acknowledge that this isn’t the only problem we have to deal with regarding the employment security and unemployment. I’ve heard from a lot of people who are frustrated by delays in unemployment benefits, erroneous notifications, and –most of all—an inability to get questions answered. And last week a contactor had a data breach that exposed claimant’s information. We haven’t fixed those issues with this bill, but I want you to know that I hear you and will insist that we continue to work on these things too. My son is one of the people who has received confusing and conflicting information from ESD and who hasn’t been able to get a simple question answered. So I know the problem is real, and I’m committed to continuing to make improvements. This week we solved one big problem, but there’s more to go. We’re still at work.

How Can We Fix Our Upside-down Tax Code?

Washington’s tax code is broken and upside-down. The lowest income families pay the highest proportion of their income in state and local taxes while the wealthiest pay far less. That means that when there is a recession – when our need for the social safety net is the greatest—our revenue drops off a cliff and we start having to ask where to make budget cuts. Those cuts almost always hurt the lowest income people in our state. It’s inequitable and it’s not working.

I asked to join the finance committee because I’m committed to fixing it. Rather than make cuts to balance the budget -which could mean cutting teacher pay, asking college students to pay more in tuition, reducing healthcare benefits—we can ask the wealthiest to pitch in a little bit more. There are several proposals for how to do this, and I’m not committed to one or another yet.

This week we have a hearing on a proposal from Rep. Noel Frame on HB 1406, which would create a one percent wealth tax on those with qualifying financial assets over $1 billion. This proposal alone would close our state’s budget gap. I’m looking forward to learning more about how this idea could work. There are several other ideas that have been discussed, and I remain open to learning more about these other approaches as well. What I do know right now is that the status quo isn’t working and it’s time to commit to fixing it.

Continuing to Fight for Clean Energy 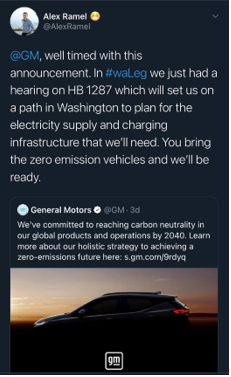 Confronting our climate crisis is a top priority, and I’m excited to be at the forefront of this important work. We’ve taken some big steps in the past week in the House Environment and Energy Committee. We held public hearings on two more bills that I’ve introduced. One, HB 1280, will advance electrification of public buildings. The other, HB 1287, will build a complete plan to ensure that our electric grid and our buildings will have the charging stations and power supply necessary to meet the growing demand for electric vehicles. This latter bill was heard on the same day that GM made national headlines with a commitment to eliminate tailpipe emissions from new vehicles by 2035.

I’m also continuing to work toward passage of the Healthy Homes and Clean Buildings Act. I’ve been working closely to address questions and strengthen the bill by making sure that all of the stakeholders are at the table. I hope to announce some successes in the coming week.