Students walk out in protest of gun violence

Kids across America—including students from schools in our district—walked out in protest on Wednesday, demanding that their leaders take steps to ensure their safety by passing stricter gun laws.

I had the honor of being invited to speak at the walkout at Mercer Island High School, an opportunity I did not hesitate to take. As a mom and as a legislator, our state’s youth are always in the back of my mind as I fight for the future, from the environment to common sense gun legislation.

I was so moved by the students, who showed through the large attendance, powerful speeches, heartfelt poem, and the dignity and respect with which they conducted the event, that our future is in good hands.

During my remarks, I recounted my devastation after learning about the tragic school shooting in Parkland, Florida. And how that same day, my gun bill was being put on pause for lack of support. 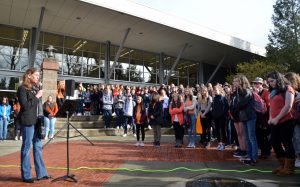 I was devastated not only for those students, their families, and their classmates, but for our country. Across the nation, we continue to stall on taking steps to address gun violence and the availability of weapons of war on our streets and in our communities.

While this session we were able to pass legislation to ban bump stocks, keep guns out of the hands of domestic abusers who harass their victims, and allow people to protect themselves during a mental health crisis by placing themselves on a firearms do-not-purchase list, it is only a start.

We need to continue bringing forward common sense gun legislation, like keeping assault weapons out of the hands of 18-21 year olds, or my bill to allow Washington State Patrol to destroy forfeited weapons, which was stalled in favor of stronger legislation and then died due to lack of time.

My main message, to the students and to all of you reading this, is that you have a powerful voice. So speak up and get loud, because it will make a difference in this conversation on gun safety. 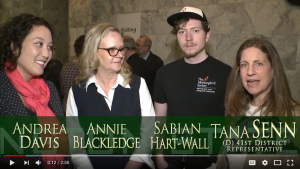 In the coming days, Governor Inslee will be signing the bills passed this session into law. One of my bills, House Bill 2530, which allows former foster children to continue coverage in the integrated managed health care plan, was signed last Friday! It will ensure access to their providers, prescriptions, and therapists as they reunite with their families.

To learn more about the importance of the bill, watch this video update where I talk with some of those who will be affected by and worked on this legislation.

Governor Inslee will be signing the Equal Pay Opportunity Act this Wednesday, March 21 around 10:30 am at the Capitol in Olympia. Please feel free to join us to watch as the governor signs this historic legislation into law, updating Washington’s equal pay protections for the first time in 75 years!

Now that session is over, I’ll be working out of the district office, 1611 116th Ave NE, Suite 206, in Bellevue. Please feel free to schedule a visit!