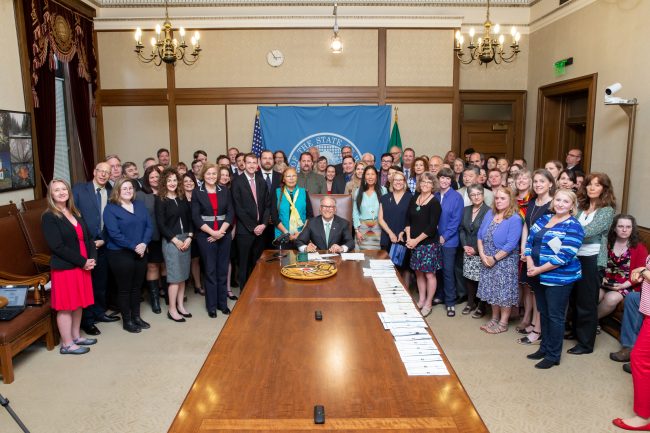 Sponsored by Rep. Joe Fitzgibbon (D-West Seattle), HB 1579 aims to address one of the biggest threats to continued survival of the Southern Resident killer whales: the ability to find enough food to survive and reproduce.

“This bill can’t turn things around overnight, but it is an important step we have to take if we’re ever going to have enough Chinook salmon and forage fish to not only sustain our orcas, but also our recreational, commercial, and tribal fisheries,” Fitzgibbon said.

Among other provisions, HB 1579 encourages more recreational fishing for non-native fish species that compete with and predate Chinook salmon by increasing catch limits for these species.

Perhaps the most significant change the bill makes is to the state’s hydraulic code, Washington’s oldest environmental law that dates back to 1943. The hydraulic code protects marine life from construction impacts, but could only be enforced through criminal prosecution – an option almost never utilized. By giving the Washington State Department of Fish and Wildlife enforcement powers, HB 1579 gives these habitat protection laws more teeth.

Also signed into law today were the following bills that together with HB 1579 make up a robust package of orca protection measures:

HB 1578, sponsored by Rep. Debra Lekanoff, which reduces threats to the iconic marine mammals by investing in oil spill prevention.

SB 5577, sponsored by Sen. Christine Rolfes, which reduces noise and disturbance from vessels to give orcas the space and quiet they need to find food and survive.

SB 5135, sponsored by Sen. Christine Rolfes, which directs the state to identify and take immediate action on five classes of chemicals known to be harmful to children and the environment, including to orcas.

SB 5918, sponsored by Sen. Liz Lovelett, requires state boating education to include information on these new regulations, safe whale watching, and other actions boaters can take to protect the health of orcas.