The Legislature took strong action this year to prevent teen tobacco and vaping use. With passage of House Bill 1074, people under 21 are no longer able to purchase tobacco or nicotine products. This is an important step but we need to do more. There is a new generation of high school students and young adults addicted to nicotine. One of the most consequential steps we can take is to make sure we have a tax on vaping products and e-cigarettes that deters use and generates revenue for prevention and cessation programs. 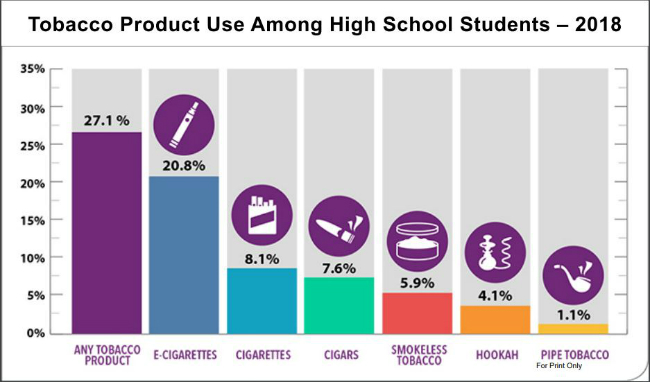 Source: The Center for Disease Control and Prevention

The problem doesn’t stop with vaping. Even though teen tobacco use is down, vaping remains a gateway to smoking. According to the 2015 National Health Interview Survey, 40% of young adults who vape frequently were never smokers before trying vaping. Teens who vape are 23% more likely to start smoking cigarettes in six months (Berry et. al, JAMA 2019). If a smoker does not quit entirely, their life will not be extended by substituting some e-cigarettes or vaping (Marynak et.al Am J Prev Med. 2017). Vaping is not a safe replacement for tobacco, or is it an approved cessation therapy.

If you would like more information on the risks of vaping and e-cigarettes on teens and young adults, the CDC has a helpful web page.

Source: The Center for Disease Control and Prevention

Fortunately, we have options. A major factor in this epidemic is that vapor products and e-cigarettes are just 15% to 40% of price of cigarettes in Washington. Low costs means teens are more likely to use these products. It also means that increasing the cost of vaping will go a long way toward deterring teen use. According to the Congressional Budget office, a ten percent increase in cigarette price leads youth to reduce smoking by five to ten percent.

That is why I introduced House Bill 1873, which would implement a tax on vapor products and e-cigarettes. The tax rate in the current version of this bill is 37%, equivalent to the tax rate on marijuana.

Because e-cigarettes and vapor products are so much cheaper than cigarettes, the cost of these products will sill only be half the price of cigarettes, even with an equivalent tax rate.

There is a bill in the Senate that would implement a meager five-cents-per-milliliter tax on vaping products. This is equivalent to a 1% tax at retail. That rate does nothing to prevent use, nor does the tax invest in the programs we need to address this problem. The only group this bill helps is the vaping industry.

Together we can stem the tide of our teen vaping epidemic and help our youth ditch these products. Banning the sale of tobacco, vapor products, and e-cigarettes to 18 to 21 year-olds is a big first step. Implementing a tax sufficient to deter use is the next. Join me in supporting House Bill 1873.