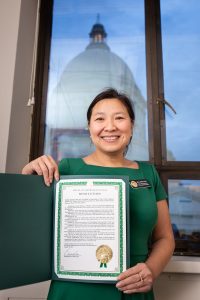 OLYMPIA – For the first time in its history, the Washington State House has adopted a resolution in recognition of the Lunar New Year, a holiday of great importance to the state’s Asian communities.

The resolution was brought forward by Rep. My-Linh Thai, D-Bellevue, who made history last month when she became the first refugee serving in the legislature. Rep. Thai came to Washington state with her family as a Vietnamese refugee at the age of 15. While many Vietnamese Americans celebrate Lunar New Year, the holiday is recognized by people from numerous Asian countries.

“This is about bringing people together,” Rep. Thai said. “We now have the most diverse legislative body in our state’s history, and it’s an opportunity to celebrate the things that connect us, and to share our cultures and traditions with all Washingtonians. This state and this country welcomed me warmly, helping me to integrate and realize my potential. With this resolution, I’m expressing my deep gratitude and giving back by sharing something that is special to me personally, and to the Asian community.”

The official Lunar New Year date for 2019 is February 5. Traditionally, it is celebrated in numerous ways, including the preparation and sharing of traditional foods, the giving of gifts, and spiritual practices commemorating the event.

According to Washington State’s Office of Financial Management, Asians make up the largest minority racial group in the state, with 8.8 percent of Washington’s population as of 2018. Rep. Thai says taking the formal step of adopting the Lunar New Year resolution recognizes the many contributions of Asians in Washington.

“This isn’t a small thing. It’s a really big thing. It is saying, ‘We as a state see you and recognize what is important to you.’” Rep. Thai said.