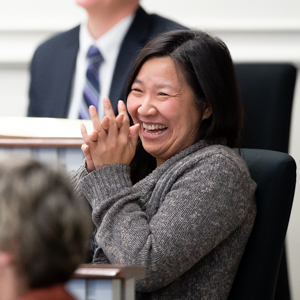 At the age of 15, My-Linh Thai immigrated to Washington state as a Vietnamese refugee with her family. She graduated with honors from Federal Way High School and from the University of Washington School of Pharmacy. She is proud to be the first refugee elected to serve in the Washington State House of Representatives.

Rep. Thai is a passionate education advocate who is committed to ensuring equity and access for all. This commitment springs from the early support she herself received as a student. Prior to serving in her current role, she has served as a PTSA parent volunteer and received the Washington State PTA Outstanding Advocate Award in 2013. She was elected as the School Board Director for the Bellevue School District, and later elected by her fellow Board Directors to serve as Vice President of the Washington State School Board Directors Association (WSSDA) in 2017.

Rep. Thai is the Vice Chair of the House Democratic Caucus. She also serves on the Civil Rights & Judiciary Committee, Finance Committee, and Public Safety Committee.